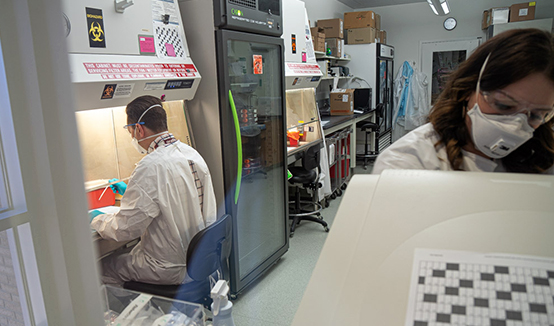 In a May 4 APHL 2021 Annual Conference session, “What Happened to Flu?,” two experts from the US Centers for Disease Control and Prevention (CDC) shared surveillance data from around the globe of the most recent flu season and highlighted animal and zoonotic flu activity.

Of the 931,726 influenza tests reported to CDC from clinical laboratories only 0.2% were positive during the 2020-2021 flu season, explained Lynnette Brammer, MPH, epidemiologist and team lead of CDC’s Domestic Influenza Surveillance Team, which publishes the weekly “FluView” report.

The 2020-2021 flu season was the first since 2015-2016 that live attenuated influenza vaccines (LAIV), administered as a nasal spray, were widely available and recommended. Some of the early positive tests were those LAIV, according to Brammer.

“When LAIV is being administered, we expect to get some of those and we did this year,” she said. So far this year, three variant viruses were identified in humans in the US: an influenza A H3N2 variant and two influenza A H1N1 variants. The detection of the LAIV virus as well as the variants show “that our surveillance system is working well,” Brammer said.

During the flu season in the Northern Hemisphere, the peak of positive tests was 400 in one week, compared to previous years of 40,000 positive tests a week. In the Southern Hemisphere, there was virtually no flu season, compared to a peak of 2,500 a week in 2019. “Most countries are continuing their surveillance, so it’s not because of lack of testing,” Brammer said.

The lack of a regular flu season is likely connected to COVID-19 mitigation measures. “The social distancing, mask wearing and handwashing look like they were pretty effective against influenza,” Brammer said. “Also, the remote learning—having children not gathered together in schools—and a lot of adults teleworking rather than working in person also likely played a major role in reducing influenza activity and probably other respiratory viruses too.”

In addition, Americans reduced their travel both domestically and internationally, sick people tended to stay home and a record number of flu vaccines were available.

“We always say influenza’s unpredictable and probably that statement is more true now than ever,” Brammer said. “We don’t know what’s going to happen.” As children started returning to school this spring, there was an increase in some respiratory viruses, she said. As mitigation efforts are relaxed around the US, will flu pop up again? “It seems like it should, but we’ll have to wait and see. And we’ll have to see what happens in the fall as schools reopen.”

Session attendees were also given an overview of influenza viruses in animals. Such viruses can be challenging to detect and report on because they are constantly changing, said Todd Davis, PhD, MSPH, team lead of the Zoonotic Virus Team in the Virology, Surveillance and Diagnostic Branch in the CDC Influenza Division.

Davis and his team closely monitor animal flu virus outbreaks across the globe, keeping an eye on those that appear to have become zoonotic (jumped from animals to humans). In particular, they examine global virus spread in birds, including domestic poultry, captive birds and wild birds. Starting in late October 2020, as winter began there was a dramatic rise in poultry outbreaks related to H5 viruses in Europe and across Asia. “Migratory birds spread these viruses far and wide,” Davis said. In fact, H5N1, or “bird flu,” has continued to evolve and spread globally since its resurgence in 2003, he said.

In addition, for the first time an H5N6 virus was detected in a person outside of China. China itself reported six human infections of H5N6 since October 2020.

APHL 2021 Annual Conference is being held online May 4-20, 2021. View the final program and follow #APHL to join the conversation.