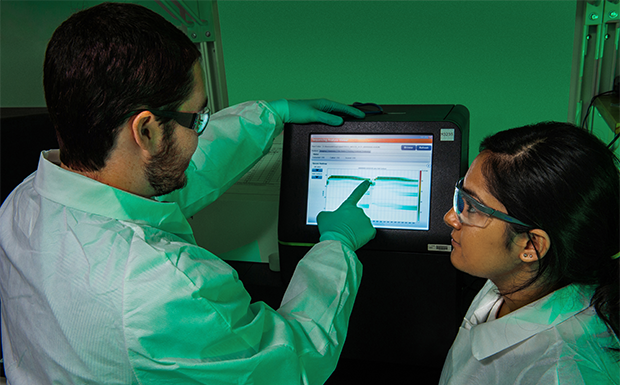 Whole genome sequencing (WGS) of SARS-CoV-2 by public health laboratories, in collaboration with epidemiologists, can provide vital information about the spread of COVID-19.

Sean Wang, DVM, PhD, sequencing and bioinformatics supervisor at the Minnesota Department of Health Public Health Laboratory, explained during the APHL 2020 Virtual Conference what his lab has learned from conducting WGS. The session “Severe Respiratory Disease Outbreaks: A Focus on Novel Coronavirus” was presented on September 22.

Whole genome sequencing is a “deep dive and careful exam” of each part of an organism’s genome, Wang explained. “It’s an interdisciplinary area of molecular biology, data science and statistics. … The entire SARS-CoV-2 genome sequencing is definitely an unprecedented local, regional, national and international effort.”

In the US, WGS has been used to trace origins of foodborne illness outbreaks. Wang cited one Salmonella outbreak that was traced back to red onions through the use of WGS. Now, WGS can provide clearer answers to public health professionals, helping them understand outbreaks in congregated settings. It can also provide the ultimate viral mutation surveillance, Wang said.

For example, on June 13, 2020, there was a new COVID-19 outbreak in a food market in Beijing, China, in which 50 people tested positive for the virus. Officials wondered if this was a resurge of the domestic virus, which would have shown that the virus was spreading again from Wuhan to Beijing (more than 700 miles away). Or was this a new strain of the virus? WGS helped answer that question, showing that the strain clustered tightly with strains in Norway, Wang said. It was then traced to the import of salmon from European countries.

“It validated that this outbreak was an import of SARS-CoV-2 outside of China mainland,” he said. “Down the road … when we have future flares, whole genome sequencing can play a good role in the source and identification process.”

Wang and his colleagues have sequenced several hundred cases in Minnesota, establishing the SARS-CoV-2 viral genomic baseline and landscape in the state. They are not focused on mutations because the virus’s mutation rate is slow, much slower than flu, he said.

They have used the sequencing to investigate COVID-19 transmission dynamics in congregated settings, such as long-term care facilities, correctional facilities, meat-packing plants and among the homeless population. Preliminary data showed that the Minnesota cases originated primarily from Europe, California, Washington state and New York state.

The public health laboratory worked closely with their epidemiologist colleagues who determined which outbreaks the lab should investigate. They discovered one cluster in which a person who worked at a long-term health care facility contracted the virus and then infected a household member who worked at a correctional facility. This event caused outbreaks in both facilities.

“This really shows how whole genome sequencing captures the viral transmission timelines for one facility to another,” Wang said.

In another case, the team discovered that all 10 specimens they studied from an outdoor concert were identical, clearly “indicating a super-spreading event,” Wang said. This helped illustrate the importance of wearing masks and social distancing even outdoors. “People were packed like sardines,” he said.

Some of the challenges the Minnesota lab faces include limited staff—only two are able to do WGS and they are also helping with COVID-19 testing. It’s also difficult to assemble a full genome when the specimen has higher Ct (cycle threshold) values, which is the number of cycles required for the fluorescent signal to cross the threshold in a PCR assay. Wang said that the specimen selection criteria varies by institution but that evidence shows that specimens with a Ct value under 30 have higher success rates. (The lower the Ct level the greater the amount of target nucleic acid in the sample.) Sequencing specimens with Ct values over 30 has worked in only 10% of the specimens in Wang’s lab.

Minnesota’s results show that “the unified effort between epidemiologists and the laboratories can illustrate some of the very interesting outbreak dynamics in those congregated settings,” Wang said.

APHL 2020 Virtual Conference is being held online September 22-October 15, 2020. View the final program and follow #APHL to join the conversation.