If I were yanked off the street five years ago and informed that I would soon be working in public health I might have been aghast, to say the least.  I was exceptionally clueless as to what public health was or what a public health laboratory did even though our state lab was located two buildings away from where I worked on campus at the University of New Mexico.  Fortuitously for me that soon changed. 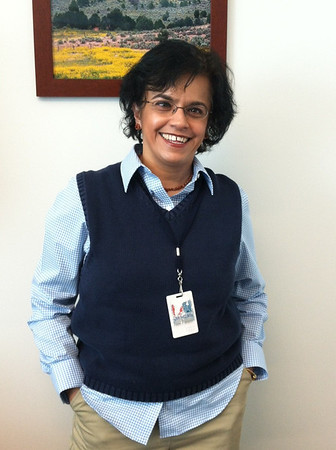 I have always been the blatantly curious type and, having more of a penchant for matters scientific than artistic, I left my home in India for the US to pursue my Ph.D. in Microbiology in the hopes that I could pursue my ambitions of trying to find a cure for some insidious disease.  A couple years after graduating, I returned to India where I shot into the world of clinical testing and research, with a focus on tuberculosis. Having witnessed the ravages of tuberculosis around me, I decided to make this disease the focus of the cure I longed to discover. I then hopped back across the ocean to an academic setting in the US.  After a decade or so of research with no concrete remedy for tuberculosis in my crosshairs, dwindling will-power, my rude realization that I was not really cut out for the cutthroat competition of research, and feeling overwhelmingly unmotivated, I searched ravenously for new challenges.

Serendipitously, through my network of friends I learned of a managerial position at the New Mexico state laboratory.  I interviewed for the job and got it. A little over three years have passed and I am still here as ecstatic and motivated as I can be, certain that this is exactly where I am meant to be.

Fortunately for me, my transition from academia has been relatively free from trauma as I attempt to fit into this new, fascinating world of public health, dwelling in the midst of some of the pathogens I love, while learning of others I never knew existed.  I’ve encountered a plethora of fascinating events, most of them pathogen and outbreak related, such as a plague case or two, several food outbreak investigations, and an elephant with tuberculosis, to name a handful.  On the whole, my experience has been overwhelmingly mesmerizing.

I am constantly brought back to a feeling from my early days in public health that has lodged itself in my psyche and liberates me.  It was during my first year at the state lab that I was dispatched to a national tuberculosis conference in Atlanta.  This was my first non-academic conference and, to me, wide-eyed as I was, the difference in the mentality of the conferees was astronomical.  I did not witness the furtive, egotistical, and selfish I, me, mine mentality that I experienced in the academic world but in fact observed quite the opposite.  The overall unselfish generosity, warmth, and pervading helpful attitude of the citizens of public health that I constantly bump into renders me awestruck, for the most part, and is something I try to aim for frequently.  This mind-set can be neatly summarized through a quote from Mister Spock, science officer of the USS Enterprise, “the needs of the many far outweigh the needs of the few.” With a bit of luck, in a few years I shall reach that destination of completely unlocking my unselfish gene.