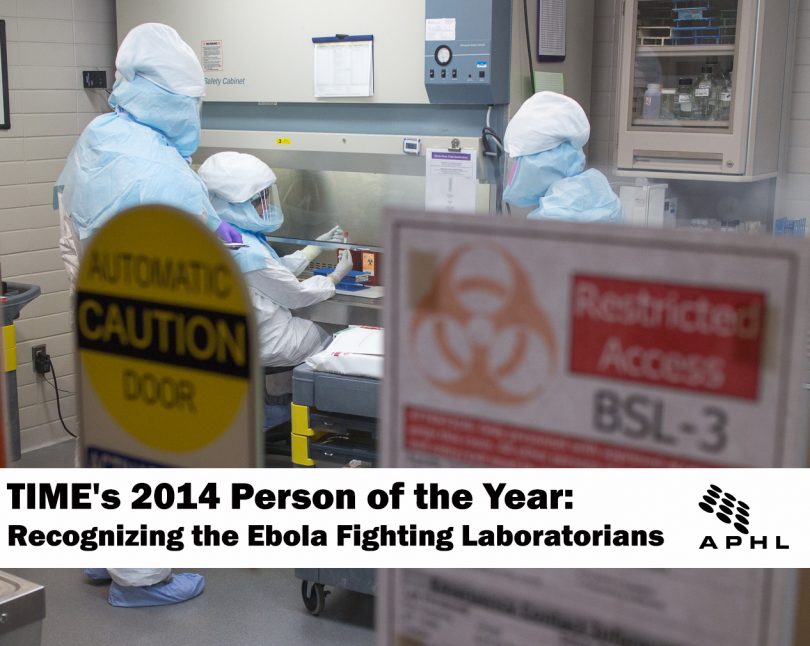 This year saw the deadliest outbreak of Ebola in West Africa, specifically in Sierra Leone, Liberia and Guinea. The West African people, their governments and numerous international organizations have been on the frontline fighting to contain this outbreak and stop the transmission chain. We agree with TIME magazine’s choice to name The Ebola Fighters as their Person of the Year. The many doctors, nurses, ambulance drivers, researchers, volunteers, survivors and so many others who continue to work tirelessly to heal the sick, protect the healthy and contain this outbreak deserve the world’s applause. Of course, we at APHL especially want to recognize the laboratorians who are a vital part of these Ebola response teams at home and abroad. They work diligently to process thousands of samples and quickly determine whether or not an individual is infected with the deadly virus, utilizing safe laboratory practices to do so.

While domestically the public health laboratories authorized to perform the Ebola detection test have continued to state this is all in a day’s work for them, the significance of this test does not go unnoticed. As samples from suspect cases are rushed to public health laboratories, ample precautions have been taken to protect and reassure those outside of the laboratory of their continued safety. Tests are performed quickly and carefully to ensure the fastest possible turn-around and accurate results. Those results help doctors and other medical professionals determine the next steps in patient care; help researchers to develop targeted countermeasures such as vaccines and antiviral medications; and if positive, allow epidemiologists to begin contact tracing to contain the spread or, if negative, offer assurance to the public that the suspect case is negative. Thanks to swift testing in West Africa and in the US, we have seen many patients recover after early and appropriate treatment – in fact, many health professionals are now referring to Ebola Virus Disease as treatable.

Public health laboratorians join the long list of Ebola fighters worthy of being called Person of the Year. They have not turned away from their responsibility of protecting the population. The Ebola fighters will likely not rest over the holidays – they will continue to battle Ebola and protect the public’s health. For that, we are grateful.