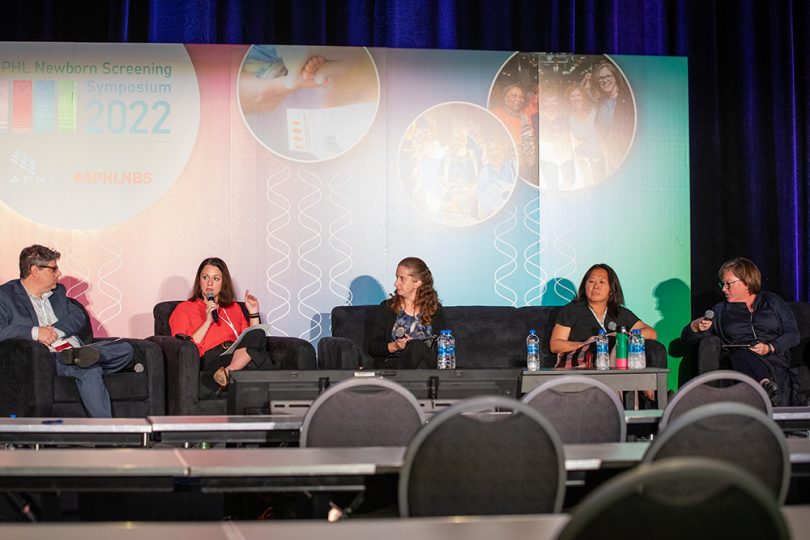 As technology continues to advance rapidly, the newborn screening community is having a robust conversation to address privacy concerns while still being able to advance the diagnosis of rare diseases that saves babies’ lives.

Speakers during the session “The Next Frontier of Genetics and Privacy: Newborn Screening at the Intersection,” during the APHL 2022 Newborn Screening Symposium in October, specifically addressed whole genome sequencing (WGS), which could be the next step for newborn screening programs.

Newborn screening programs exist in all 50 states. Conducted when an infant is only a day or two old, newborn screening checks a baby for rare, serious and mostly treatable health conditions such as sickle cell disease, cystic fibrosis, phenylketonuria, hypothyroidism and more. It is done through a blood test by pricking a baby’s heel to get a few drops of blood. A hearing test and heart screening are also conducted.

Whole genome sequencing — which maps out an individual’s entire DNA sequence — can be used to diagnose a disease in a sick child, but is also used in healthy newborns to look for potential issues. It is not routinely done as part of newborn screening. But will that change in the future? And what are the potential privacy consequences?

“We are at a time where newborn screening is sitting between changing technologies, changing panels, the use of whole genome and exome sequencing in both families experiencing rare disease and in healthy newborns. … At the same time, on the other side, we have an increased concern among families and communities around genetic privacy,” said session co-moderator Aaron Goldenberg, PhD, MPH, professor and vice chair in the bioethics department at Case Western Reserve University and the co-director for Case Western’s Center for Genetic Research Ethics and Law.

In a Michigan lawsuit, lawyers argued that the existing consent form —which is required from parents before their baby’s blood can be used for research — was vague and that parents were not sure what they actually signed. In New Jersey, privacy concerns were highlighted when it was uncovered that law enforcement used an infant’s dried blood spots to identify a criminal suspect related to that child.

Session presenter Rachel Lee, PhD, HCLD, medical screening unit director in the Laboratory Services Section of the Texas Department of State Health Services, outlined the health department’s experience in Texas, which was sued and settled the lawsuit in 2009. The lawsuit said the storage and use of newborn screening blood spots violated the Fourth Amendment, which prohibits unreasonable searches and seizures.

Texas had begun destroying all its blood spot samples before the settlement; 5.3 million specimens were destroyed between 2002 and 2009, Lee said.

Before the lawsuit, Texas didn’t require parental disclosure. That changed after the settlement, when the state passed multiple laws to address privacy concerns. The state now requires disclosure of specimen storage and use for other purposes. Initially, a 2009 law allowed parents or adults to request destruction of samples; in 2011, a new law changed that opt-out process to an opt-in requiring parental consent to store and use their infant’s blood spot. The new law also limited use to only public health purposes.

The health department had to consider and develop new processes for request and approval, destruction, storage and documentation, Lee said. “We also did a lot of engagement and education and communication to stakeholders, the public and parents, hoping they understand why these specimens were valuable to us,” she said.

Since the new laws, about 40% of parents allow storage, while 17% require the specimens be destroyed. The remaining 43% do not return the decision form. “We do have educators trying very hard to reduce that number,” Lee said.

Without the specimens, it’s more difficult for the public health laboratory to ensure the testing process is performing as well as it should be, she said. It also makes it challenging to add new conditions to the NBS panel.

Presenter Wendy Benson, MBA, outlined the important findings that WGS can uncover. Benson is chief strategy and innovation officer at Rady Children’s Institute for Genomic Medicine in San Diego. The institute works with 83 children’s hospitals to conduct WGS on severely sick children in intensive care units to determine what rare disease they might have. In the institute’s eight years, it has sequenced about 3,500 genomes and has a 40% diagnostic rate.

“This journey has been so humbling,” Benson said. “We work with really smart medical geneticists, but it’s amazing how much we don’t know.”

For example, the institute uncovered 13 Kabuki syndrome cases in San Diego. Kabuki syndrome is a rare, multisystem disorder; the symptoms and severity differ among individuals.

“These don’t look like your normal Kabuki [cases],” Benson explained. “These kiddos are in the ICU; they have wires and tapes and all sorts of tubes coming in and out of them, so the phenotype doesn’t look like Kabuki. There’s obviously stuff we don’t know about Kabuki because we’re finding so many of them so early.”

Benson outlined a study that showed the critical need for WGS. The San Diego Study of Outcomes in Mothers and Infants San Diego County used the county’s 20 years of collected blood spots to study unknown deaths among babies younger than one year old. Among 45 infant deaths, WGS showed that 31% had a genetic disease; of those, 57% had an effective treatment available if the children had been diagnosed.

The institute is starting a study that will conduct WGS on 50 infants, looking at 400 disorders. As the institute scales the project and builds its partnerships, its goal is to sequence more than 1 million babies, Benson said.