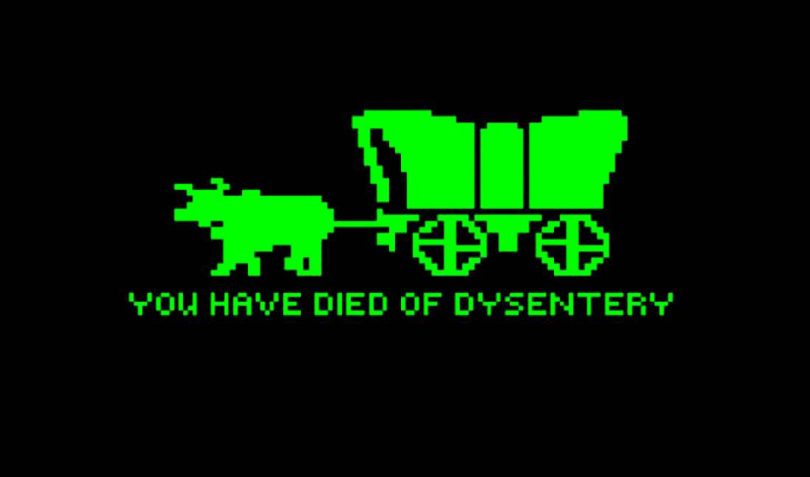 Anyone who was in grade-school in the mid-1980s and 1990s likely remembers The Oregon Trail, a computer game where you had to navigate the treacherous conditions faced by American pioneers who used this lone passageway to travel from Independence, Missouri to Oregon City, Oregon.  If you ask anyone who played the game what they learned, however, it was that the Apple II had terrible graphics.  They also likely remember fording the river, hunting buffalo, and losing a family member to dysentery.  What many children may not have realized as they played this game is that the experiences were real.  The Oregon Trail was real and so were the many diseases faced by those who traveled it.

You have died of dysentery.  Everyone has cholera.  Susie has measles.  As a young player, these messages would pop up on our screen and result and in “Aw, man!” They meant that your trek was delayed or even over.  You had to find more food or water or just wait out whatever the disease was that had infected someone in your wagon.  But what are these diseases?  And do they still exist?

Three deadly diseases featured in The Oregon Trail – typhoid fever, cholera and dysentery– were caused by poor sanitation.  Luckily, those of us living in industrialized nations (United States, Canada, Japan, Western Europe, etc.) have access to sophisticated modern sanitation and water treatment systems, which make these diseases so rare that they are nearly non-existent.  But the “deadly three” are not rare in developing nations.  Americans traveling to these destinations are often encouraged to get vaccinated and to be extra careful to thoroughly wash their hands, avoid tap water and consume only cooked foods.

If typhoid fever, cholera and dysentery are left untreated, they can become deadly, causing severe dehydration.  In industrialized nations, anyone who contracts these diseases is protected by the medical and public health systems, and the spread of disease is halted.  If an outbreak is suspected, public health laboratories test samples to positively identify the agent that is causing the disease, while epidemiologists and public health nurses work in coordination with sanitarians to identify the source of the infection.  This quick action is what stops further transmission.

The other diseases that plagued those traveling on – or playing – The Oregon Trail were highly contagious infectious diseases.  When an entire family was living in their Conestoga wagon for months at a time, disease spread very quickly.  Fortunately, widespread use of vaccines has all but wiped out these diseases.

A common practice when playing The Oregon Trail was to name all of your family members for your friends.  Then as the game progressed, we would all laugh when Sally got dysentery – Haha! You have dysentery! You have dysentery!  It isn’t so funny now, huh?  I certainly wouldn’t wish these terrible diseases on anyone, and can better understand how amazing it is that anyone made it along the Oregon Trail.  It is a relief to be able to say that most of these diseases are gone, thanks to our strong public health system.

And, Sally, I’m sorry I laughed when you got dysentery.