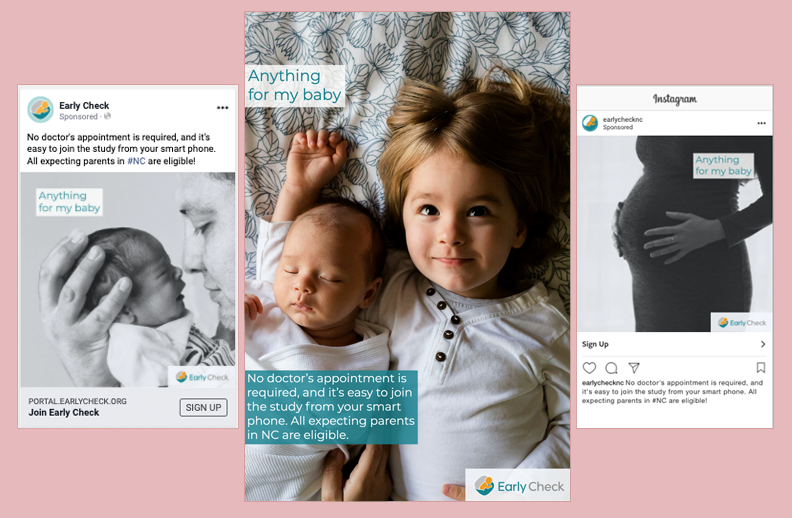 In 2019, the RTI research team decided to add paid social media ad campaigns to their efforts because paid ads would allow them to conduct targeted, low-touch and cost-effective recruitment online. Initially they tried Facebook and Instagram ads, recruiting 234 eligible new parents/pregnant people. Once the COVID-19 pandemic hit in 2020, limiting in-person recruitment, they started a new ad campaign in April 2020.

The team ran 10 ad campaigns from April 2020 to March 2021. Based on past experience, they created Facebook ads in Spanish and English and Instagram ads in English. The budget, which ranged from $250 to $350 per day for two-week campaigns, was distributed between the two platforms. (Facebook owns Instagram, so ads for both are managed on a single platform.) Each ad set had 5-10 ads.

“One of the great things about Facebook and Instagram is that they have powerful targeting tools, which allowed us to target the gender, age and location of our audience, along with helpful keywords,” Pikowski said.

In the end, each campaign led to an average of 94 new sign-ups at an average cost of $49 per sign-up. Overall, there were 942 sign-ups. About 8% who clicked the links were eligible, and 60% of those eligible enrolled in the study.

In May 2021, the researchers added Pinterest to their efforts. Pinterest has 400 million monthly active users, and 80% of US moms who use the internet are active users on Pinterest, according to Pikowski. The site is particularly popular as people plan for parenthood, she said.

Pinterest allowed them to target a “parenting” category and add 25 keywords related to pregnancy and newborns, since it is more of a search-based platform. They used the same five ads on Pinterest, Facebook and Instagram for one week, and spent $350 per day on each platform.

Pinterest results were low during that first trial. The researchers later learned from a Pinterest ad representative that once an ad campaign is over, users can still see Pinterest “pins.” This led to 28 eligible participants signing up within the four weeks after the campaign ended. Pinterest ads also take at least a week to fully optimize, so an “always on” campaign strategy is a better choice than the “on/off” strategy used for Facebook and Instagram, Pikowski said.