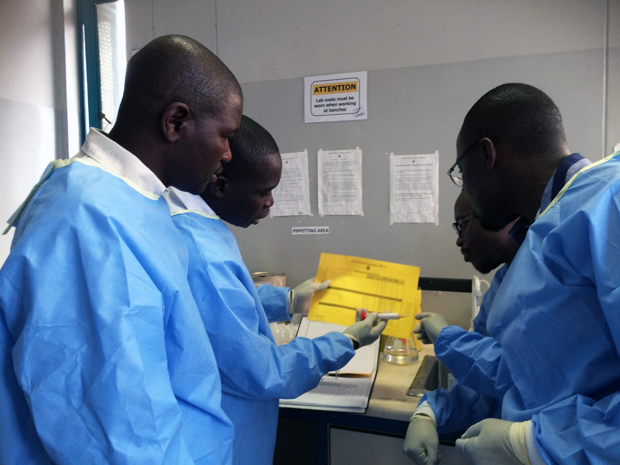 For decades, APHL has worked in more than 30 nations to train and support lab professionals fighting HIV/AIDS, often under agreements with CDC and the US President’s Emergency Plan for AIDS Relief (PEPFAR). One of those nations is Zimbabwe.

APHL is working closely with the Zimbabwe Ministry of health to provide leadership, mentorship and support in an effort to increase patient access to quality tests for monitoring HIV treatment. In addition to increasing testing capacity at six provincial laboratories of public health (aka, super laboratories), APHL and the Ministry of Health established a state-of-the-art transport system for blood samples so that patients in remote areas would gain access to testing. Levi Vere, an APHL consultant, supervises the in-country team to meet these objectives.

Not long ago, some of my relatives were among the people who had to travel long distances to a city hospital for a test to learn if they had HIV. Sometimes they would line up at 4 a.m. and wait four hours for the clinic to open, only to be sent away because there were too many people seeking HIV services that day.

Today, they can access testing and treatment in clinics that are a stone’s throw from their homes. Those clinics connect to our six Ministry of Health super laboratories, with samples transported by a motorbike delivery network.

This is just one of the changes supported by our work in Zimbabwe. It seems simple, but these improvements have made an enormous difference in people’s health. Seeing these changes in their lives really touches my heart, and keeps me excited about the difference we are making every day.

Handling logistics and samples is only one challenge. Zimbabwe faces a huge staff deficit in lab services.

Zimbabwe has historically had a strong university program, resulting in valuable laboratory expertise. We have 10 Zimbabweans on the APHL-Zimbabwe staff team: eight highly qualified medical technologists, a highly experienced database administrator and an office administrator.

But much of this country’s expertise has emigrated. The government typically can’t afford competitive salaries for laboratorians. University training capacity has also suffered under economic hardships. Current microscopy training isn’t sufficient for the complex tests required for monitoring HIV treatment.

The national budget for fighting the HIV/AIDS pandemic is tiny, and the total gross domestic product spent on health is small. The Ministry of Health’s allocation often must go to purchasing drugs, not to laboratories and testing. Hospitals struggle because so many patients can’t afford to pay.

And the challenge of sample transport needs further consistency and improvement. Better access for patients in remote areas would not only improve testing and treatment for HIV/AIDS, but would extend to surveillance for other diseases, such as tuberculosis and malaria.

Other challenges are cultural. HIV is a chronic issue, so people have become used to it and don’t have the same level of response as when it was seen as a crisis. Also, it’s culturally acceptable for men to have several wives which means several sexual partners. And because men face stigma in visiting a hospital, many don’t seek help until they’re quite sick.

Technical know-how alone will not change systems—it takes a change in the laboratory culture. I have seen a huge leap in commitment to quality.

When I began as a mentor, I experienced resistance to change. But when the laboratory personnel began to see the impact of their efforts and the improvements we were making together, they placed more value on the importance of their work.

The change in morale was remarkable: Staff don’t just come in and quietly head for their bench. Everyone’s ideas are welcome. We saw reductions in sick leave applications and absenteeism, and more punctuality. People are willing to go the extra mile.

The three letters at the heart of change: QMS

I supervise our mentors who coach and train the laboratory staff in organization, management of testing processes and quality assurance protocols. In order to pass proficiency testing and gain lab accreditation by international standards, they must learn and adhere to World Health Organization (WHO) and International Organization for Standardization techniques.

Lab monitoring of patients on treatment is another critical factor. APHL laboratory mentors at the six super laboratories help ensure quality of services from data to supplies to equipment maintenance.

In the past, we had to handle so many samples that lab equipment would often break down. I remember one mother in the infant HIV testing lab who was in tears because she couldn’t breastfeed her baby until lab results were in—and the machine had broken.

With technical assistance from APHL, including attention to routine maintenance, equipment downtime has been greatly reduced.

With the new transport system bringing more tests from far-flung areas, our changes have opened the floodgates to testing. In the past year, we performed 25% more CD4 tests, a standard measure for HIV. We have more tests to do each day, and we’re improving them by every measure: completing them faster, with less spoilage, fewer rejection of samples and more accurate results.

Improvement in turnaround time of tests—the time from sample collection to release of the results to the patient—is particularly important. For instance, infant HIV test results used to take six weeks and now take five days—or even three. As I mentioned above, this time difference is critical for breastfeeding mothers—they need to know if their HIV status or medication will affect their children.

Our work has truly helped make the difference: fewer equipment breakdowns, more efficient use of supplies, improved understanding of quality and the use of standardized, streamlined processes.

Until now, our focus was on building the capacity of the labs that we support. This year, we will focus on expanding viral load testing, which we have already launched in two of our super laboratories so far.

Viral load testing is a more sensitive test for monitoring efficacy of HIV treatment. It measures the rate of suppression of the virus itself, as opposed to CD4 testing which slowly monitors the impact of such suppression on the body’s defenses. With viral load testing, we can see resistance to treatment in a patient sooner and switch treatment quickly to one that works.

With the WHO promotion of a test-and-treat strategy, our focus is on ensuring quality of HIV tests, both in early infant diagnosis and in HIV rapid diagnostic testing.

The sooner patients start treatment, the better the outcome, so we are ramping up our efforts to get accurate results. We will then monitor treatment progress through viral load testing as quickly as possible. This entails adding more instruments and reagent supplies in all of our labs to keep pace with both the viral load testing demand and the increased numbers of people being tested.

For Zimbabwe, for Africa and for the world, the next goal is to reach the United Nations’ 90/90/90 goal: 90% of people are tested; 90% of these are on treatment; 90% of these have an undetectable viral load.

The fact that we can even discuss reaching this goal is amazing; it reflects the progress that we and other partners are making in Africa. As the Zimbabwean proverb says, “If you can envision it, you can accomplish it. If you can imagine it, you can reach the heavens.” In Zimbabwe, we are reaching for the heavens.

Interested in becoming an APHL global health volunteer? We offer consultancies for two weeks to 12 months in Africa, the Caribbean, Eastern Europe or Southeast Asia. Learn more about making a difference with APHL.