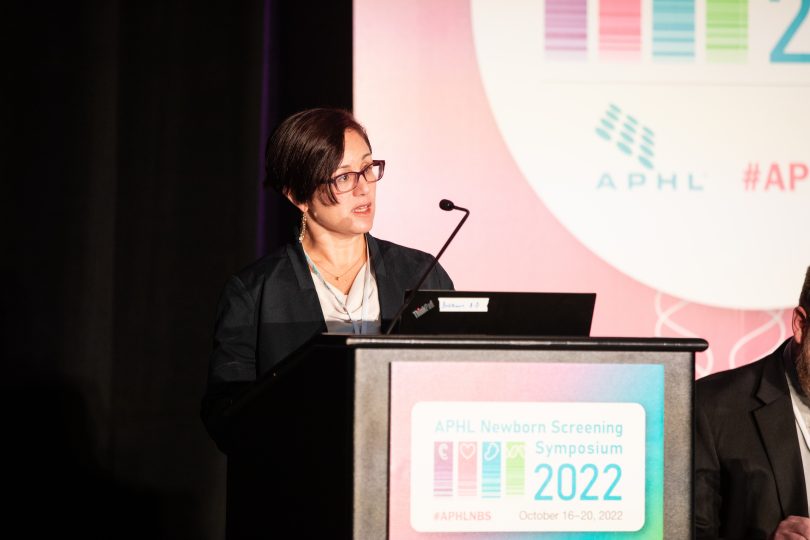 Sickle cell disease (SCD) was first identified in 1910. In 1972, Congress recognized SCD as a significant public health concern, passing the National Sickle Cell Anemia Control Act to establish education, screening, testing, counseling, research and treatment programs. Despite that, it wasn’t until 1998 for the first treatment, a medication called hydroxyurea, to be approved in the US.

“That’s relatively appalling. Almost no other disorders in the room have that kind of tragic history,” said Julie Kanter, MD, director of the adult SCD program at the University of Alabama, Birmingham and president of the National Alliance for Sickle Cell Centers, which was created in 2020.

It took another 21 years for the next drugs to be approved. And today, Kanter said, more than 50% of adults with SCD are not being treated by SCD experts.

Kanter’s presentation was part of the keynote session, “Improvements to Technology, Testing and Treatments: Progressing towards Universality in Newborn Screening,” during the APHL 2022 Newborn Screening Symposium in October.

She illustrated how much more needs to be done to improve SCD treatment and the quality of life for patients—particularly overcoming political and financial barriers to care and engaging families soon after a baby’s newborn screening.

People with SCD, which can be a very painful disease, have abnormal hemoglobin in their red blood cells that causes the cells to become hard and sticky and die early causing a shortage of red blood cells. Kanter pointed out SCD is a multi-system vascular disease—it’s not only about the red blood cells. “All that damage to the endothelium and the inside of the blood vessel means there’s not a single organ that remains unaffected by this disease,” she said.

SCD is the most common inherited clinically significant blood disease in the US, Kanter said, affecting approximately 120,000 people. The survival rate to adulthood has improved from less than 50% in 1970 to nearly 95% in 2010, thanks largely to the newborn screening process that detects SCD in the first week of a baby’s life. SCD was first included on the newborn screening panel in 1975, starting in New York. By 2006, it was on all 50 state panels, which is considered a major public health success story.

However, Kanter illustrated that while many newborns are diagnosed early, they are not receiving appropriate care or being seen by a SCD specialist throughout their lives. She illustrated the problem through the case of her SCD patient Janelle (not her real name), age 29. By the time Kanter saw Janelle as an adult, she had several complications including fatigue, chronic pain, death of bone tissue in two joints and alloimmunization, meaning her body’s immune system put up a fight against the red blood cell transfusions that should have helped her.

Janelle had also tried one of the only SCD medications at that time, hydroxyurea, but she didn’t take it regularly because she wasn’t sure why she was supposed to be taking the drug, Kanter said. Janelle was among those who lived into adulthood with SCD. However, she was on disability, had to drop out of college, felt she couldn’t leave her house for long periods and had been hospitalized five times in the previous year.

“This is why we’re not there yet. We’ve improved childhood mortality—great. … But we haven’t improved mortality overall, specifically in our young adults,” Kanter said. Recent data show adults with SCD die on average at age 43 for women and 41 for men.

In 2015, Kanter restarted Janelle on hydroxyurea—and explained to her why she needed it—and created an individualized care plan for her. Those interventions decreased her hospitalizations to twice a year, but she still had very frequent acute pain. In 2017, she was given a new drug, crizanlizumab, which significantly decreased her acute crises. Her last hospitalization was in 2018, though she still seeks treatment at Kanter’s clinic for frequent pain.

Janelle later asked to be considered for gene therapy, but an evaluation showed that she had more antibodies in her blood than Kanter had ever seen. This meant there were no blood units available that she would need to have blood transfusions as part of gene therapy. Because Janelle had not been cared for appropriately and had not previously seen a SCD specialist, she could not undergo gene therapy, Kanter said.

While SCD is more prevalent than hemophilia and cystic fibrosis combined, there are only half as many comprehensive adult SCD centers in the US compared to more than 130 each for the other two diseases, according to Kanter.

Until recently, SCD had no coordinated network of centers; they were all operating in siloes. And there was no clear definition of what a sickle cell center was. There is no SCD registry to collect long-term data, and there is an insufficient number of centers with experts focused on adult SCD care.

“How’d you know if you went to a sickle cell center versus someone who hung their shingle up and said, ‘yes, we can take care of you with sickle cell disease’?” Kanter explained.

And the drugs now available to treat SCD are used by less than 50% of the people who need them. The rise in mortality occurs in the early adult years, ages 20 to 24, which often puts the blame on the transition from pediatric to adult care. But Kanter said that’s not the full story. She undertook a study of 421 SCD patients to see when patients were lost to follow-up care.

“The most common predictor for whether or not they made it to my adult center was whether they were seen after 15 years of age. … These patients were lost to follow-up long before transition [to adult care],” she said.

To prevent this, Kanter called for early engagement with families from sickle cell centers, right after newborn screening leads to a SCD diagnosis. Recent data show that early childhood-specific treatments are not being done. Penicillin prophylaxis is given continuously to fewer than 30% of children ages 1–5 with SCD. There is currently no standardized protocol for SCD diagnosis via a newborn screening program and no definition for when the program resolves and closes the case.

“This clearly suggests to us that there’s some insufficient, poorly standardized newborn screening follow-up programs because some of these kids just aren’t getting to care,” she said.

Kanter invited newborn screening programs to join her ENHANCE Study, an APHL-funded quality improvement project to study and develop an optimized protocol for notifying SCD families and a definition of “case resolution” for newborn screening departments. Kanter is also leading the RECIPE study, which aims to identify and link underserved adults with SCD to specialists. The RECIPE study will adapt the concept of “linkage coordinators” used successfully in HIV care.

“I can’t tell you the number of 30- to 50-year-olds who walk into my clinic that haven’t been seen by a sickle cell specialist,” she said. “Many of them don’t even know we exist, much less how to get there or make an appointment.”

Kanter acknowledged that newborn screening for SCD has resulted in amazing improvements in care and reduced childhood mortality. “But despite these improvements, many children and adults are not getting guideline-based care for sickle cell disease.” Although several “amazing” therapies are being developed, without access to SCD centers, patients will never receive the right treatments, she said.