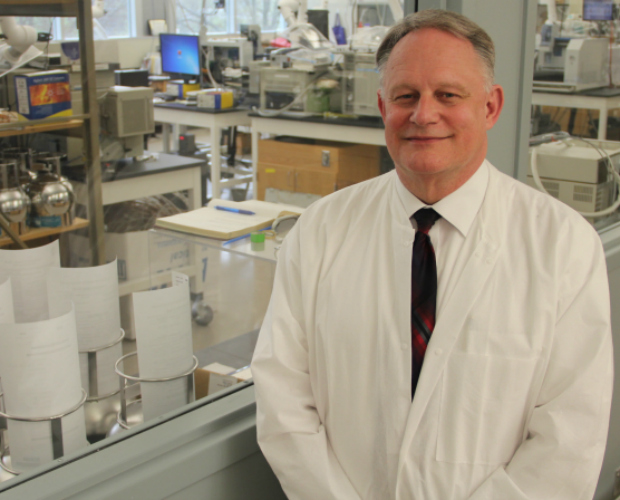 How did you first come to work at the State Hygienic Laboratory at the University of Iowa?

That was nearly 29 years ago. I was working in Cincinnati, Ohio at the time as a research chemist at a small inorganic pigment manufacturing company, and I saw an ad posted in the February 1, 1987 edition of the Kansas City Star for a chemist at the University Hygienic Laboratory (later renamed the State Hygienic Laboratory (SHL)). I still have a copy of the original ad. I grew up in Iowa, almost attended the University of Iowa and followed Iowa State and University of Iowa sports. I was also a Kansas City Royals and Chiefs fan which is why I was subscribed to the Kansas City Star. Returning to Iowa to be closer to my family for a position with the University of Iowa was quite appealing. (Note, my family also noticed the same ad in the Council Bluffs, Iowa and Omaha, Nebraska newspapers. They sent the ad to me via U.S. Mail — 1987 was way before email.) I submitted a typed (anyone remember typewriters?) application letter and resume on February 19th to the laboratory, had a telephone interview on Good Friday, an in-person interview the Monday after Mother’s Day and started my position at the laboratory that July.

Environmental health is public health. One could argue that the origins of public health were founded in response to environmental issues. Testing performed by the state environmental health laboratory is a valuable source of objective information to determine the effect of environmental exposures on human and animal health. This can range from determination of asbestos, metals, nutrients, environmental and blood lead, as well as numerous organic compounds such as pesticides and polycyclic aromatic hydrocarbons (PAHs). These analytical services may support local, state and federal compliance monitoring requirements (Safe Drinking Water Act, Clean Air Act, Clean Water Act, etc.), as well as local or state monitoring programs such as monitoring rivers, lakes and ambient air.

How are environmental labs unique? What makes them different from other types of PHLs?

Environmental laboratories are required to maintain a variety of certifications and accreditations for their various testing services, but these can vary vastly between states. Labs may need to be accredited by either the state, EPA or the National Environmental Laboratory Accreditation Program (NELAP). Additional accreditations may be required for asbestos, lead and industrial hygiene testing. The only certification consistent across the United States is for drinking water analysis under the Safe Drinking Water Act, and the State Principal Drinking Water Laboratory (which is generally the state environmental laboratory) which is certified by the EPA Regional Office.

What is an example of a situation early in your time at the Hygienic Lab where you really felt the value of your work?

There have been many incidents over the years. One example that comes to mind is when there was a diesel fuel spill in the Lucas Building where the Department of Health is located. A new fuel tank had been installed in the basement of the building, but not attached to the fill valve outside the building. Before the valve was attached to the tank, a diesel fuel tanker truck stopped by and began to fill the tank. Fuel went directly into the basement and eventually into floor drains and the wastewater treatment plant. Due to the potential toxicity of fumes, the building was evacuated and staff were not allowed to return until testing determined that the indoor air was safe. Laboratory staff worked most of the night to analyze samples to determine if the building was safe to reoccupy

Another example occurred Memorial Day weekend when the shredded tire lining at the Iowa City landfill caught fire. The smoke could be seen and smelled for many miles. SHL staff came into the laboratory that Saturday, Sunday and Monday. They deployed air samplers, collected and analyzed samples all weekend. Data was provided to local emergency management and local public health to develop and distribute public health announcements.

What’s the wildest thing that you have seen or heard of coming through your lab?

We have received many interesting samples over the years including a water sample in a Sioux Bee Honey® container, a tennis shoe, an actual bee hive, lead wheel weights, candy, various toys and more for testing.

What is something you think most people don’t know about environmental labs?