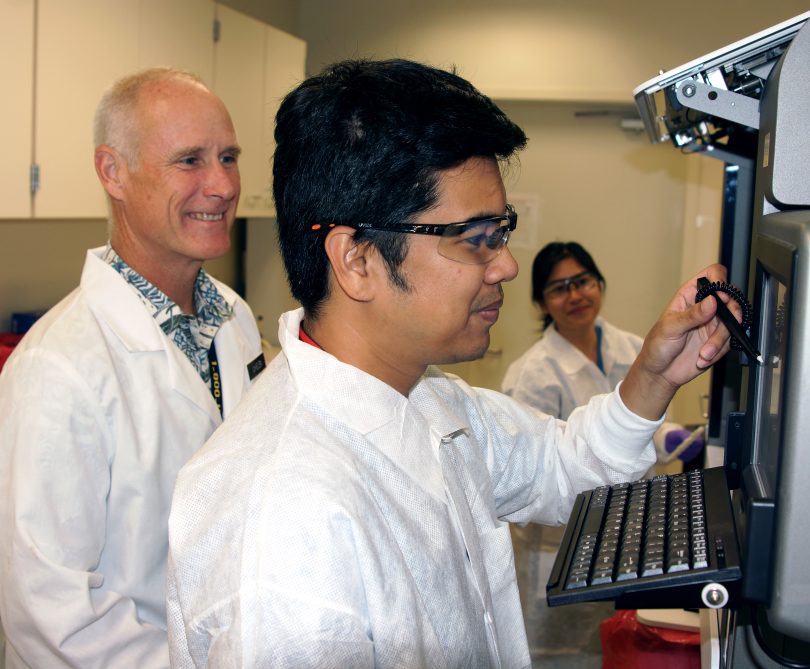 We spoke with Chris Whelen, PhD, laboratory director of the Hawaii Department of Health State Laboratories Division, about the state lab’s work and what he loves about his job. Chris is also president-elect of APHL’s Board of Directors.

How did you first come to work at the Hawaii Department of Health State Laboratories Division?

Right place, right time. I was approaching 20 years of active military service in the United States Army and serving at Tripler Army Medical Center in Hawaii when the Administrator position at the Hawaii Department of Health State Laboratories Division opened to external recruitment. The job appealed to me because I’ve always had an interest in population health. I was already familiar with reportable diseases and the Laboratory Response Network activities, so I was a pretty good fit, although I had a bit of a learning curve in other areas like ambient air monitoring and testing raw agricultural commodities for pesticide contamination.

Laboratory science is a great way to generate data to answer questions and make good, evidence-based decisions. A state public health laboratory performs testing that other labs are unwilling or unable to perform such as outbreak associated testing. For example, let’s say there’s a disease that has not presented in the community for years and therefore has had low test demand suddenly causes an explosive outbreak requiring extensive resources for several months before slipping away again. Responding to these types of situations does not fit into a commercial lab business model. Also, public health environmental labs can monitor for trends that can be identified well below the reportable contamination level, which means potential sources can be investigated, identified and eliminated before they cause harm.

What is the state lab’s role?

To be prepared to perform analyses that aid investigators and reassure the public. I know that may sound like a marketing sound bite, but it is true – and I really believe in it.

How does your lab work with other governmental labs in the state?

We work very closely with other labs – literally. We have a very nice laboratory facility, so we house the Department of Agriculture (DOA) pesticide lab and provide test support for DOA veterinary services like avian influenza and classical swine fever through our participation in the National Animal Health Laboratory Network (NAHLN). I’ve also maintained close ties with Tripler Army Medical Center, which has been mutually beneficial.

How are state labs unique? What makes them different from local public health labs?

What is an example of a situation early in your time at the Hawaii Department of Health State Laboratories Division where you really felt the value of your work?

In my first year at State Labs, we launched an online process to renew clinical laboratory personnel licenses, which replaced archaic, expensive and labor-intensive postcard mailing procedures. After smoothing out the bumps immediately after launch, the benefits to both us and the community were pretty obvious. Licensed personnel quickly adapted to the online renewal, and when we added online payment during the next renewal cycle, over 90% of licensees paid electronically.

Over the last 10 years many things have been rewarding; from helping disease investigators in Hawaii and other Pacific Islands respond to outbreaks to preventing the importation of Salmonella tainted seafood to our supermarkets. I feel the value of the work produced by our State Laboratories on a daily basis. It gives me a rather selfish sense of pride.

What’s the wildest thing that you have seen or heard of coming through your laboratory?

An extremely unlikely set of circumstances led to an unusual diagnosis. We were collaborating with CDC to establish some clinical performance characteristics for a real-time PCR test for Angiostrongylus (rat lung worm) in cerebrospinal fluid (CSF) from patients with eosinophilic meningitis under an Institutional Review Board (IRB) approved protocol. Colleagues at Kaiser Permanente were assisting by providing de-identified specimens and some clinical information. Another internal effort was using excess CSF from syphilis serology requests to evaluate test performance. Unexpectedly, one of those specimens repeatedly tested positive for Angiostrogylus DNA. As luck would have it, the original request for syphilis serology came from Kaiser. Because we had an approved protocol, I was able to ask the chief pathologist/ lab director to review the chart for suspicion of rat lung worm disease. The infectious disease consultant on the case called 30 minutes later verifying the clinical suspicion and relieved to have information on a potential diagnosis because, “we were testing for everything available;” thus the CSF syphilis serology. Additional testing at CDC confirmed our detection of Angiostrogylus DNA. That was a pretty good catch.

What is something you think most people don’t know about state public health laboratories?

That they exist. It is a constant battle trying to raise community awareness of the terrific work that occurs in public health labs, and whenever I get an interested individual or audience, they are amazed. A lot of my job involves trying to recruit new members of the Hawaii State Labs Fan Club.