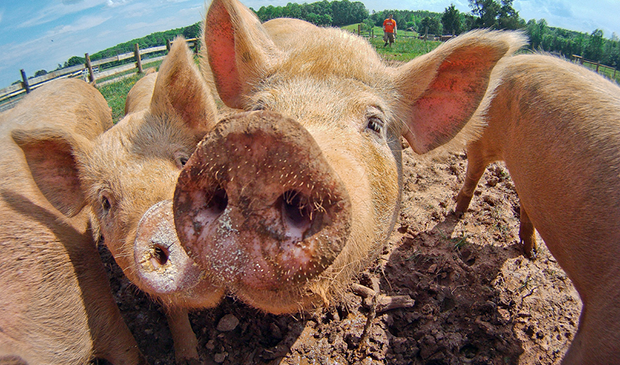 In Washington state, it’s not entirely unusual for tiny clusters of foodborne illness to pop up throughout a given year. But in mid-2015, when reports of Salmonella clusters began popping up one right after another across multiple counties, public health workers knew they had a bigger problem on their hands.

Eventually, with the help of the nationwide lab network known as PulseNet, state and local public health investigators were able to connect the nearly two-dozen Salmonella clusters and trace the source to contaminated pork from Washington-based Kapowsin Meats, which ended up recalling more than 116,000 pounds of whole pigs and more than 523,000 pounds of pork products. But solving this outbreak came with a number of twists and turns, with public health workers first suspecting an entirely different culprit — beef.

“At the beginning, we weren’t sure what was making people sick,” said Ailyn Pérez-Osorio, PhD, molecular epidemiologist in the Washington State Department of Health’s Public Health Laboratories. “One of the first clusters was from an Ethiopian graduation party and they don’t typically eat pork, so it was pretty confusing.”

The Salmonella clusters began surfacing in June 2015, with the largest one a group of eight people who had attended an Ethiopian graduation party. A similar incident had occurred the year before also at parties and restaurants in the Ethiopian community, and those Salmonella clusters had been traced back to raw beef included in a traditional Ethiopian dish known as kitfo, said Beth Melius, MN, MPH, RN, foodborne and enteric disease epidemiologist at the Washington State Department of Health. So when the eight-person cluster popped up in summer 2015 and had the same serotype as the previous year’s Salmonella strain, Salmonella I 4,[5],12:i:-, public health investigators naturally looked to raw beef as the potential source.

But then events took a turn. Within days and weeks of the Ethiopian party cluster, state and local public health began receiving reports of Salmonella illnesses connected to pig roasts and live pig exposures as well. After receiving isolates from ill patients, public health lab staff went to work, using pulsed-field gel electrophoresis, or PFGE, to determine the samples’ DNA fingerprints. PFGE results found the same pattern over and over again. But public health investigators were still puzzled — the PFGE pattern was particularly uncommon in Washington, so it would make sense that all of the illnesses were connected to the same contaminated source. But how were the raw beef from the Ethiopian celebrations and the pork from the pig roasts related?

Public health and environmental health investigators hit the ground, interviewing residents who had purchased the whole pigs connected to the Salmonella clusters, gathering as many leftover foods as possible for testing, and reaching out to the markets and restaurants where sick residents had shopped or eaten. Eventually, public health workers with the Washington State Department of Health and Public Health — Seattle & King County traced the likely source of the contaminated pork back to Kapowsin Meats. The entire investigation took less than two months, Melius said. As for sickened residents who hadn’t reported eating pork, public health inspectors determined that cross-contamination was the culprit. For instance, said Pérez-Osorio, at an Ethiopian restaurant where sickened residents had eaten, inspectors found remnants of the contaminated pork in a meat grinder also used for beef.

In all, according to the Centers for Disease Control and Prevention, 192 people were infected with outbreak strains of Salmonella I 4,[5],12:i:- (188) and Salmonella Infantis (4) in five states: 184 people in Washington, one in Alaska, two in California, two in Idaho and three in Oregon. In addition, CDC’s National Antimicrobial Resistance Monitoring System lab conducted antibiotic-resistance testing on isolates from 10 patients sickened during the outbreak, finding that all 10 samples were multidrug resistant.

Among the 180 patients for whom information is available, 17 percent had to be hospitalized. No deaths were reported during the outbreak, which Melius described as the state’s largest Salmonella outbreak in recent history.

Both Pérez-Osorio and Melius said PulseNet, which celebrated its 20th anniversary in 2016, was invaluable to solving the outbreak.

“PulseNet allows you to view data not just by pattern, but by where the cases are coming from — it helps you map it all out,” said Pérez-Osorio. “It’s not just the connectivity between states; it’s the whole PulseNet system that allows our lab access to the methods that can lead us to quickly solving these outbreak investigations.”

Melius said PulseNet allowed public health workers to “crack” the multicounty outbreak much quicker than they would have otherwise. With so many little outbreaks happening across a dozen Washington counties, she said PulseNet was key in helping investigators determine which clusters and individual illnesses were connected to the larger outbreak.

“I don’t think we’d solve even half the outbreaks that happen without PulseNet,” said Melius, who also noted that the state’s public health lab conducted PFGE testing on more than 100 samples over the course of just a couple months, with each isolate requiring 16 hours of hands-on work. “It’s a combination of epidemiology, lab work and PulseNet — that’s how we solve our outbreaks and we couldn’t do it without all those pieces.”

On a side note, Pérez-Osorio mentioned that solving such investigations could face additional challenges in the future with the emergence of culture-independent diagnostic testing in clinical labs. She explained that such testing allows clinical labs to identify the general type of bacteria making a person sick, without having to grow or culture the bacteria in the lab. That means clinical labs can determine the cause of a person’s illness much quicker and at lower costs. On the flip side, the method doesn’t generate the particular isolates that public health labs need to connect seemingly separate illnesses and detect a larger outbreak.

“The issue is that generating an isolate is very expensive and as a public health lab, we’re not set up to do that — we’re set up to analyze the isolate,” said Pérez-Osorio. “Right now, all public health labs are facing this issue to one degree or another.”