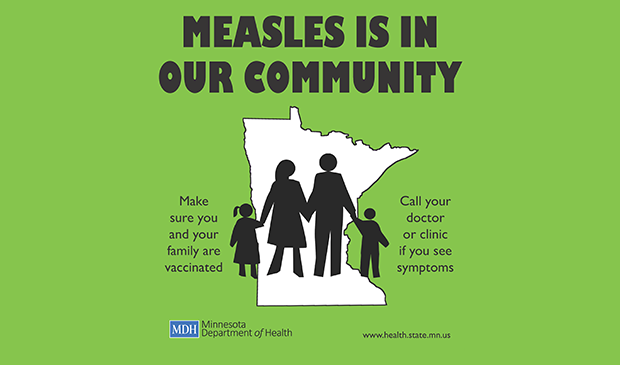 In the U.S., rates of vaccine-preventable diseases are so low that many commercial labs don’t even have the ability to test for them anymore. The shift reflects the hard work of decades-long immunization efforts. But it also means that when there is a vaccine-preventable outbreak, just about all of our rapid diagnostic capacity resides in one place: the public health lab.

The latest example of this is in Minnesota, where a measles outbreak hit 78 confirmed cases as of June 16. The state is typically home to less than a handful of measles cases each year — most years, the case count is between zero and two. At the Minnesota Department of Health’s Public Health Laboratory, which is the only lab in the state that can do real-time reverse-transcription polymerase chain reaction (rRT-PCR) testing for measles, staff have received more than 800 specimens for measles testing since April, with a goal of fully processing each one the same day it’s received. To stop an outbreak, both speed and accuracy are critical.

Fortunately, Minnesota lab workers are trained and ready to provide both. But sustaining that kind of surge capacity over the long run and in the face of new and emerging disease threats is always challenging — even in the best funding environments.

“We’ve spent a lot of time increasing our capacity over the last 10 years and we’re seeing that capacity being put to work,” said Sara Vetter, PhD, manager for infectious diseases at the Minnesota Public Health Laboratory. Vetter noted that Minnesota last experienced a measles outbreak in 2011 — “and that one seemed huge and it was just 26 cases of measles.”

This year’s measles outbreak is almost entirely concentrated in a Somali community in Minnesota’s Hennepin County, home to more than 1 million residents. The outbreak officially began on April 10, the same day the lab confirmed the first positive case. Nearly all the cases are among unvaccinated children younger than 4 years old. No deaths have occurred, though about a quarter of infections have led to hospitalization.

Inside the public health lab’s Virology/Immunology Unit, technicians track the measles outbreak using a rRT-PCR test, which allows them to detect the highly contagious virus much quicker than private labs that can perform serological testing for measles antibodies. That quickness is key, said Anna Strain, PhD, supervisor of the Virology/Immunology Unit, because it means the health agency’s epidemiology team can then quickly locate people who may have been infected and get ahead of the outbreak before it spreads.

The rRT-PCR test may be quicker than serological testing — it detects measles RNA, as opposed to measles antibodies, and is less confounding than serology — but it’s not completely definitive, Strain said. After conducting rRT-PCR testing on each of the more than 800 specimens that come into the lab, any positive specimens undergo genotyping to determine if the patient is infected with a wild-type measles strain or if the rRT-PCR is simply picking up on the live attenuated virus that’s contained in the measles-mumps-rubella vaccine. Genotyping can also determine if the case is related to the larger outbreak. (On a side note: In addition to its regular testing responsibilities, the Minnesota Public Health Lab is partnering with the Centers for Disease Control and Prevention and Canadian public health officials to develop a PCR test that’s specific to the vaccine strain of measles. Such an test would be particularly helpful in an outbreak, Strain said, because technicians could then forgo the extra step of genotyping.)

“It’s actually meant quite a lot of maneuvering,” Strain said, referring to the logistics of responding to the surge in measles testing. “In some ways, we were lucky that it happened in April when flu season was dying down — otherwise a number of testing staff trained for measles testing would have also been doing flu testing. If the (measles outbreak) had happened any sooner, it would have been really hard to keep up.”

From start to finish, the measles test takes about five hours, Strain said. Lab staff can process 10 measles specimens at a time and up to 30 specimens in day — though that’s a stretch, she noted. In comparison, the lab can process up to 150 flu samples in day and often does.

“As hard as it’s been in the lab, it’s been even harder for our epidemiologists — they’ve had more than 7,000 contacts to trace and to follow up on,” said Joanne Bartkus, PhD, director of the Minnesota Public Health Laboratory. “It’s been daunting for all of us.”

Vetter said that most of the lab’s current surge and response capacity is thanks to federal public health preparedness funding as well as funding from CDC’s Epidemiology and Laboratory Capacity for Infectious Diseases (ELC) Program, both of which currently sit on the budgetary chopping block. On preparedness, President Trump’s fiscal year 2018 budget proposal calls for cutting CDC’s emergency preparedness budget by $136 million — that’s on top of years of preparedness cuts public health agencies have already absorbed. (In total, Trump’s budget calls for cutting CDC’s budget by $1.2 billion, or a whopping 17 percent.) The ELC, on the other hand, is wholly entwined with the Affordable Care Act’s Prevention and Public Health Fund, which allocates $40 million in annual ELC funds to state and local health departments in every state. Under current ACA repeal-and-replace bills in Congress, the Prevention and Public Health Fund would disappear.

And while ELC and preparedness monies don’t categorically support the Minnesota lab’s vaccine-preventable disease work, Vetter said the funds have been essential in ensuring the lab can quickly scale up its response, regardless of whether the emergency is vaccine-preventable or not. In other words, the Minnesota lab has spent years building an all-hazards response system that readies it to face any health threat that lands at its doorstep. Being able to sustain that nimbleness, however, would be at risk if funding declined.

“Without that funding, we’d probably have to choose what we respond to because we’d run out of people and out of machines — we just couldn’t keep up,” Vetter said. “If our funding gets cut, we can’t maintain our machines, we can’t replace machines, we can’t train more people … what we do is very complex.”

At the same time the Minnesota Virology/Immunology Unit has been responding to the measles outbreak, it’s also been responding to a mumps outbreak on the University of Minnesota-Twin Cities campus, providing surge testing for a mumps outbreak in Washington state that recently hit nearly 900 cases, and taking in and testing about 20 specimens a week for Zika virus. All of that is in addition to its more regular duties, like rabies and West Nile monitoring.

In the wake of the measles outbreak, Minnesota Health Commissioner Edward Ehlinger, MD, MSPH, called on state policymakers to create and support a public health response contingency fund. Such a bill was introduced into the Minnesota House of Representatives for consideration in May.

As of late May, Strain said the Minnesota measles outbreak — which exceeded total U.S. cases for all of 2016 — seemed to be entering a “tapering phase.” As she said that, however, she paused — and quickly added “we all just knocked on wood.”

For more on the Minnesota measles outbreak, visit www.health.state.mn.us/divs/idepc/diseases/measles.