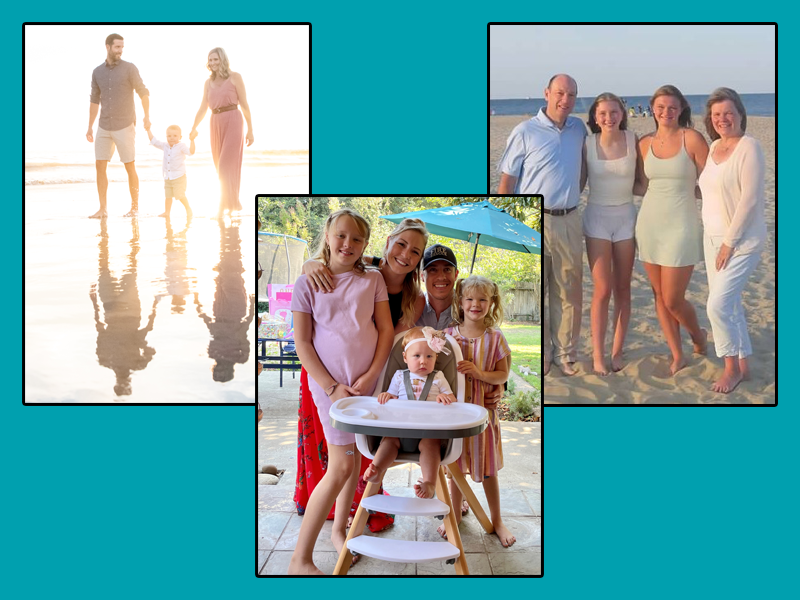 (Photo from left: the Kettler family, the Lamb family and the Pytel family.)

Christina and Daniel Kettler had barely been home a day in June 2019 with their five-day-old son, Fitz, when their pediatrician called with devastating news. Fitz’s newborn screening results showed he had an immune deficiency, making him highly vulnerable to infection and illness.

The San Diego family rushed to Rady Children’s Hospital, where Fitz was placed in a sterile room. A blood sample was sent off for whole genome sequencing. The results showed that the infant had severe combined immunodeficiency, or SCID, a rare disease more commonly known as “bubble boy disease.” Specifically, Fitz had Artemis SCID, a severe form of primary immunodeficiency caused by mutations in the DCLRE1C gene. The Kettlers were told their baby likely wouldn’t live to see his first birthday.

When the Kettlers were initially told to return to the hospital because Fitz’s immune system was compromised, they didn’t believe it. Christina was confident it had been a lab error. You see, Fitz was an IVF baby conceived with a donor egg. Both Daniel and the anonymous egg donor had genetic screening done.

“I was really naive at that point because I just assumed the genetic test would flag everything, and clearly that wasn’t the case,” Christina said. Later, she contacted the IVF agency and “begged them” to tell the egg donor and any other parents who used the woman’s eggs that she was carrying this defective gene. However, because the process is anonymous Christina doesn’t know what happened after her call.

As for Fitz, the family was told that a bone marrow transplant was the go-to treatment but that babies didn’t always respond well to it. Then, the medical team learned of a gene therapy trial at University of California, San Francisco accepting kids with Artemis SCID.

Fitz got in. He would be patient 007, a little James Bond baby. Fitz’s stem cells were harvested, and a healthy copy of the DCLRE1C was introduced. In the lab, his stem cells began making healthy new cells. At two months old, Fitz was given the healthy cells via an infusion into his port in just 15 minutes. Then, they waited.

Fitz, who is an only child, and his parents lived in hospital isolation for three months, as the baby’s body continued to make more and more healthy immune cells. In early December, 007 was released from the hospital.

Now, Fitz leads a fairly normal life for a two-year-old in the middle of a pandemic. The family goes to the park, playground, zoo, beach and a friend’s pool. Christina said she “doses him” in hand sanitizer and keeps an eye on people. “I’m like a Secret Service agent everywhere we go; I’m checking people out, who looks sick, who’s coughing.”

But Fitz is alive and healthy, as his immune system continues to grow. He recently received three rounds of dead vaccines, and they’re waiting on test results to see if he can get live vaccines for chickenpox and measles, mumps and rubella.

“For a family and a kid in the SCID world, to even be able to talk about that he might be able to get live vaccines is huge,” Christina told conference attendees. She said she always goes back to that initial heel prick that she barely knew was happening. “It was the worst day of my life, but the best day for my son.”

Three other families shared their heartwarming, successful stories of newborn screening and medical advancements during the session.

Natalie and Eric Lamb’s daughter, Etta, was born in September 2020. A few days later, they were told she had tested positive for spinal muscular atrophy (SMA). They were also able to begin gene therapy with Etta, with a drug called Zolgensma, which was approved in 2016. However, it took a few weeks to get the drug, and Etta began showing signs of SMA — having difficulty turning her head and not bearing weight on her legs.

Etta was given the drug when she was 26 days old. The Lambs point to the importance of newborn screening as children with SMA need to be treated as quickly as possible because any muscle atrophy can’t be reversed.

The Lambs know that parents in other states aren’t as lucky. Sixteen states do not include SMA as part of their newborn screening panel.

Natalie and Eric are both nurses, but when a neuromuscular doctor first called with Etta’s diagnosis, they didn’t understand what she was talking about. “She basically just started spitting a bunch of genetic information at us, and all we heard was complete gibberish,” Eric said. All the couple wanted to know was “What does this mean for our child?”

The families on the panel had a few recommendations for health care providers delivering newborn screening results. They agreed that it would be better if pediatricians, or another provider with whom the family has a relationship, called with the results. When Diane and John Pytel received a call in 2006 that their newborn, Mia, had phenylketonuria (PKU), John thought it was the “state” calling. He assumed it was a Pennsylvania bureaucratic mistake because it was just some stranger on the phone.

The families have also heard of resistance to newborn screening, due to lack of education on the topic. Reasons given include thinking the government is going to have their baby’s DNA stored in a database, that there are no genetic diseases in their family so it’s unnecessary, and for home birth families, that it’ll disrupt their bonding and they’ll “do it later.”

Better parent education could dispute those reasons and explain the importance of newborn screening and early diagnosis and intervention, the panelists said.

None of the parents remembered hearing about newborn screening and its importance during their pregnancies. Perhaps they were handed a pamphlet at some point without explanation, they agreed, but none of them remember hearing it mentioned in any of the parenting or baby CPR classes they took.

“It just seems like somewhere in there there could be more mention that newborn screening will occur on day whatever it is and it’s very important and here’s why,” Christina Kettler said.

As Eric Lamb said, “This treatment is life-changing, and without the newborn screening, (Etta) probably wouldn’t be here today.”