This storm was one of the most intense experiences I have faced.  The damage inland was substantial. The destruction along the Jersey Shore was catastrophic.  Entire towns were obliterated and may not return for a very long time.  The places of my childhood memories in Seaside, Point Pleasant, Ocean City, and Long Beach Island are gone…wiped off  the face of our great State.  I will never be able to take my 19 month old son to these places and say “this is where daddy used to play when he was your age.” Very sad.

My staff and I are very, very lucky. Many were without power, a few lost trees, and some lost siding, but no major losses and, most importantly, no loss of life.

The laboratory took a minor hit when solar panels blew off our roof and smashed into the skylights in our atrium (see photo). Otherwise, our backup systems performed exceptionally and the newborn screening laboratory remained 100% functional throughout the storm. 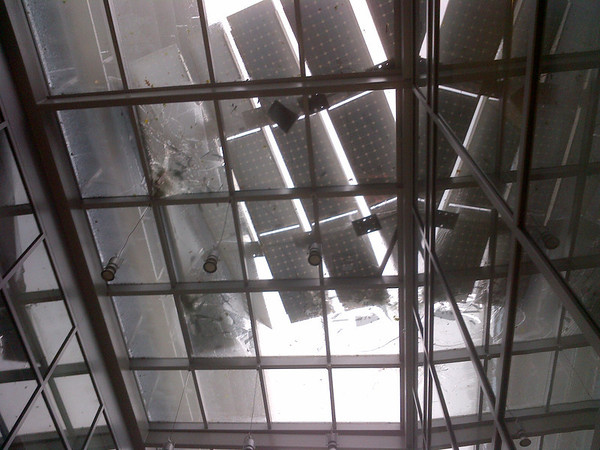 I am proud to say that the NJ Newborn Screening Laboratory is operating with no delays and no backlog thanks to the remarkable dedication and hard work of our staff, and intense collaboration/coordination between multiple state agencies, local government entities, advocacy groups, birthing centers and UPS. The Follow-up Program is only catching up on paperwork associated with all the specimens we tested during the storm.

It all comes down to one thing: We were prepared.  All of the Newborn Screening Laboratory staff are weather essential.  Thus, even when the State is closed, I can call staff into work.  Additionally, in the NJ Department of Health, the Public Health Laboratory is in the same Division as our Emergency Preparedness group; therefore, they are well aware of the significance of the Newborn Screening Program.  As we have been developing our continuity of operations plan (COOP) and preparing for our NYMAC (New York-Mid-Atlantic Consortium for Genetics and Newborn Screening Services) sponsored specimen exchange drill with NY, we have met routinely with NJ State Police and the Office of Emergency Management to increase our name recognition should an event like this happen. Finally, we have an excellent relationship with our UPS representative and she has been an advocate for us within her company.  In fact, the Newborn Screening Laboratory has our own address in the UPS system so that the sorting center can separate our packages as we are open even if the State, including the other public health labs, is closed.

On Saturday before Sandy hit, I had additional staff come in to perform as many assays as possible and to complete data entry.  This ensured we went into the storm week without a backlog.  On Monday, as the storm approached, Governor Christie closed the State offices and UPS suspended all services. However, we had staff come in early to finish up Saturday’s work. Further, because our UPS center understood the importance of newborn screening, they delivered Monday’s specimens despite being “closed”.

Including me, 19 of 34 newborn screening lab staff made it in on Monday… a truly heroic effort.  We were able to get every specimen accessioned, punched and assays started.  While I sent most staff home by 2:00, a few of us left at 4:00, about three hours before landfall.  The drive home was wicked as my car’s transmission actually shifted up and down with the 50-60 mph head-winds.

From home, I coordinated with our Department’s Deputy Commissioner and Health Command Center (HCC) to determine if we could establish alternate specimen pickups for Tuesday and Wednesday knowing UPS would be closed. NJ has regional Medical Coordination Centers (MCC), and it was decided that hospitals would transport their newborn screening specimens to one of three MCCs (Newark, New Brunswick, or Camden) and New Jersey State Police, who are some of the best in law enforcement in this country, would retrieve the specimens and transport to the laboratory. In addition, the New Jersey Hospital Association (NJHA) offered to make contact with all of the hospitals to notify them of the alternate plan.

The storm hit late Monday and most of us lost power at home. With the State closed on Tuesday and no specimens to test thanks to our work on Monday and closure of UPS, I told staff to stay home.  That said, my Quality Assurance supervisor, Donna McCourt, and I headed in around 10:30am on Tuesday and the NJHA notified all of the birthing centers to transport newborn screening specimens to their region’s MCC by 2:00pm. The State Police was scheduled to pick up the specimens at 4:00pm and transport to the laboratory so we contacted the six staff members who lived closest to the lab and they all offered to come in to help accession, punch and start running the specimens.

That night we received 412 specimens from 21 of our state’s birthing hospitals. It was a lower turnout than we expected for a Tuesday. We discovered that the NJHA had notified the hospital emergency coordinators of the plan but not all hospital emergency contacts notified their nurseries/laboratories. This is something we will work on in the after-action process. My staff and I accessioned, punched and started what assays we could before leaving around 10:00pm.

On Wednesday, despite the State closure, all newborn screening staff were asked to report; I had 32 of 34 staff in the lab that day (one who didn’t make it relies on public transportation which wasn’t running and the other one is 86 years old and was staying with her daughter out-of-town).  I spoke to our UPS representative early in the morning and learned that UPS would deliver to the laboratory, but pickups throughout the state were spotty.  Thus, we continued with the MCC plan from Tuesday; however, I had newborn screening lab staff contact every nursery/laboratory rather than relying on the NJHA to make notification.  The Follow-up Program building was closed so they had three of their staff come to the laboratory to work. That afternoon, the State Police delivered 576 specimens from 40 hospitals.  This was much closer to what we expected.  Staff remained to accession, punch and start assays.  Our Capitol Post Office was closed and the Program’s mail was backing up.  Our Lab and Follow-up Medical Directors, Drs. Evan Cadoff and Lori Garg, took the 500+ envelopes to a local Post Office and paid out-of-pocket (reimbursement is coming!) to get our mail out.  Staff left around 5:00pm.

On Thursday, the State officially reopened and things began to return to normal.  UPS had restored service to all hospitals except 14, which were all in the North and Central regions. The Newark MCC had UPS service so rather than sending the State Police, who are needed for other tasks, we had the MCC gather all northern specimens and ship to us for delivery today. The New Brunswick MCC did not have UPS service so we sent a courier to retrieve the specimens from Central Jersey.  Testing progressed normally and all results continued to flow out on time. Our Capitol Post Office remained closed so staff took our reports to another USPS location and used a Department credit card to pay for postage.

Today things in the lab are almost normal.  Follow-up is still catching up on paperwork.  Our Capitol Post Office has reopened and clearly the acute crisis is resolving since I have time to write our story.

We maintained testing everyday through the storm and aftermath, and we reported out all results in our required time frames, including calling critical results.  In the end, during one of the worst natural disasters on record in this State, the screening of newborns for life-threatening conditions continued uninterrupted.  There will be a lot of post-event reviews performed and I look forward to improving our emergency system.  In the meantime, please keep New Jersey in your thoughts as much of our State will take weeks or even months to return to a new normal.