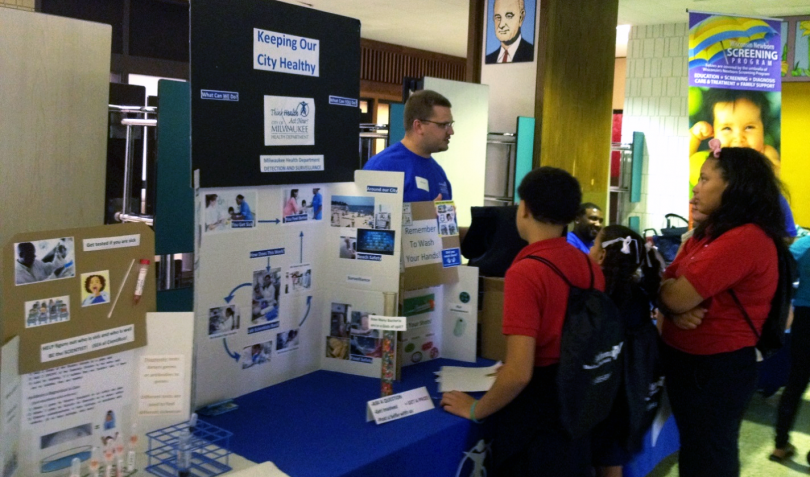 This year the Milwaukee Health Department Laboratory (MHDL) presented an innovative information booth at the fair that showcased its contributions to the community and encouraged young people to pursue careers in laboratory science. “Studies show that it’s critical to reach out to kids and stimulate their scientific curiosity at a young age,” explained Dr. Steve Gradus, director of MHDL. “Experiences like this can capture their imagination and inspire them to pursue a career in public health.” 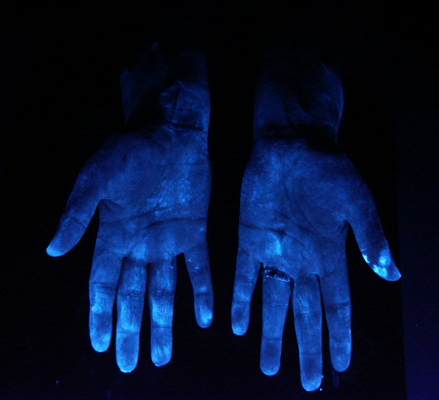 At the booth, families met Noah Leigh, virologist II at MHDL, who explained how germs are spread. With his hands covered in Glo-germ™ lotion, Noah shook hands with children and invited them to look at their hands under a UV light to see how he had spread “germs” (really the Glo-germ lotion) to them without them realizing it. This exercise supported a healthy habit and reinforced parents’ advice – “That’s why I always tell you to wash your hands before you eat!” – with a scientific explanation from a real-life public health scientist.

Children donned safety glasses to become special lab assistants for the day, and visited an imaginary classroom to play “Guess Who’s Sick,” a game created by booth designers Beth Pfotenhauer, virologist III, and Dr. Kwadwo Owusu-Ofori, lab operations manager. Using pipettes and micro-well plates to guess who was sick, kids shouted, “Look! He’s Sick! He’s Sick!” as bubbles spilled out of the multi-well plate containing the samples of “sick” children. “Wow that was a neat experiment! Even I learned something,” said parents as they thanked the MHDL staff for the educational experience. 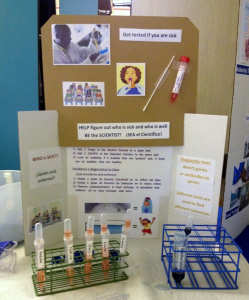 While the children were busy, MHDL scientists took the opportunity to discuss laboratory services with the parents and teachers. “Most visitors were familiar with beach water testing or lead testing, but were not aware of the laboratory services as a distinct division of the MHD,” commented Leigh. “It’s important to educate our community about all areas of the health department. It’s a two-way street. The public does its part by engaging in healthy habits like hand-washing and keeping vaccinations up-to-date, while the health department conducts disease surveillance and mitigates microbial and chemical health hazards.”

Staff provided language translations and easily interpretable pictures to communicate the basic premise of diagnostic testing to children from diverse cultural backgrounds. “The highlight for me was when a young Indian immigrant who spoke no English was able to play our game and correctly determine which kids were ‘sick’ just by pointing to our pictures,” said Pfotenhauer.

“The booth was a success! It provided a positive experience that quickly engaged children and hopefully inspired them to pursue a career in laboratory science,” said Dr. Owusu-Ofori. “The diverse demographics of the Back-to-School Health Fair site made this location ideal to expand our outreach. APHL reports that there aren’t enough emerging public health laboratory scientists to support the growing global population.” With its booth and creative programs, MHDL aims to bring those numbers up.

“Kudos to all our lab staff members who were actively engaged in this very successful effort, allowed better visibility for our public health laboratory in the community,” said Dr. Sanjib Bhattacharyya, deputy lab director.