The fall of 2001 was a defining time for public health laboratories. It was the anthrax letters mailed to several media outlets and United States Senators that brought this form of bioterrorism in the U.S. to the forefront of national news. Still in its infancy, the Laboratory Response Network (LRN), which was created in 1999 to increase bioterrorism and chemical terrorism response capabilities, established itself as a key force for national security as the anthrax letters circulated. In fact, a Florida LRN laboratory was one of the first to recognize inhalational anthrax from a sick person, thus beginning the influx of human samples and laboratory tests conducted by the LRN. These events highlighted the importance and strength of the LRN, and although it wasn’t a household name, the LRN certainly became a name that the public health world knew and valued. 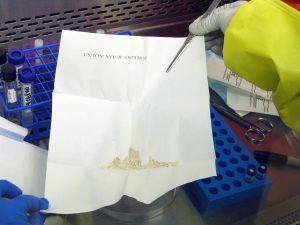 Fast-forward to 2013 and public health laboratories have added a variety of gadgets to their utility belts to uphold their public health preparedness and response core function (they actually have 11 core functions total that support all of public health). The laboratories continue testing for anthrax but also other potential bioterrorism and chemical terrorism agents, including the recently infamous ricin toxin. These utility belts contain not only actual gadgets (e.g., advanced diagnostic technologies) but also active partnerships comprised of an intense network of players, including hospital and private laboratories, law enforcement, fire departments, and federal programs.

In 2001, the partnerships between the public health laboratories and first responders (e.g., police, fire, hazardous materials teams) facilitated the anthrax response, and since then, these partnerships have only grown stronger. Daily, states continue to see letters and packages containing suspicious powders. And although these powders are typically of the powdered sugar or baby powder varieties, first responders and public health laboratories continue to respond as rapidly as ever. Who knows when the next suspicious powder with an actual threat will emerge (this year’s ricin letters showed us that this form of terrorism is still quite popular), but what we do know is that the public health laboratory/first responder partnerships will always be leveraged to ensure that the nation’s security is upheld.