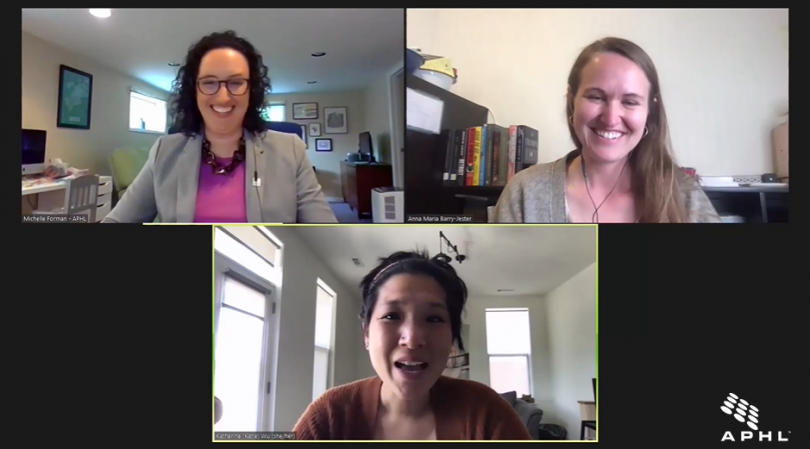 Journalists who are given broader access to public health workers as interview sources can build trusting, long-term relationships. That, in turn, often leads to more compelling, comprehensive public health stories for readers, according to two science journalists who spoke at the May 11 APHL 2021 Annual Conference session “Public Health Journalism and You: How Can Everyone Benefit from This Relationship?”

When it comes to public health reporting, access to sources is a basic need that can often be a challenge. Sometimes it is easier for reporters to interview academics rather than on-the-ground public health workers because the latter group often has more restrictions and layers of approvals before speaking with media, explained Anna Maria Barry-Jester, MPH, senior correspondent at Kaiser Health News.

“A lot of public health is also built on public institutions, and it’s such a different process to find out who works in those places. … There’s also a very heavy firewall in many places of how you can get approval to talk to public servants,” Barry-Jester said.

They are those public servants who Barry-Jester often enjoys interviewing the most “because they have to confront the fact that we live in a world that’s not just [science], that the science is in an interplay with politics in a way that’s very interesting and really relevant to how public health is done.”

When looking for article sources, Katherine J. Wu, PhD, a staff writer at The Atlantic, said she always keeps diversity in mind. That includes gender, race and ethnicity, but also educational background and job seniority. “I love quoting grad students,” Wu said. “They’re often the ones doing the pipetting. Even if they don’t feel like they’re the experts, they certainly know more than I do.” (Wu’s PhD is in microbiology.)

To find sources, Wu often looks up the authors on research papers on that topic and browses university departments to see what people’s expertise is. During the COVID-19 pandemic, experts often popped up on Twitter as public health professionals and scientists have shared their knowledge and thoughts via Twitter threads, she said.

The two journalists shared their process for story development. Once they have a story idea, they talk it through with their editor to figure out what the important, relevant questions are for their respective audience. Then they start their research and interview process. Later comes writing, editing and fact-checking with the sources.

Wu added that as she considers story ideas, she will often come up with topics such as vaccine reluctance or COVID-19 testing but recognizes that those areas are too broad for one article. Instead, she explained, a good story needs a through line with a clear and compelling narrative, with stakes for the reader.

Potential sources often ask Wu, “What is the story you’re writing?” Time and again, she cannot answer that because she is still figuring that out through the interview process.

“It’s really not unlike gathering scientific data,” she explained. “You start out with a hypothesis, you go out and you talk to people, you gather information. And, sometimes it requires a complete reworking. The best stories are often the unexpected ones that crop up along the way.”

The journalists agreed that the most compelling articles for readers combine facts and data with people’s stories. Public health infrastructure stories may not seem “sexy” at first. But, Barry-Jester argued, journalists can educate readers about how public health works. Again, however, that can only happen when public health employees are given permission to be interviewed.

Wu agreed: “So much of journalism is getting to know individual people and hearing their stories.”

Having ongoing, extended conversations is also helpful. Sometimes those conversations are “informational interviews” that inform the reporting, Barry-Jester explained.

“Many people throughout the last year have been extremely generous in letting me go back to them over and over and over again, including people at APHL, but also people in smaller labs, people in local public health departments,” Barry-Jester. “Sometimes I never even quote them, but they are so instrumental in helping to bring to life what is happening in public health infrastructure, and what’s supposed to be happening, and what’s missing.”