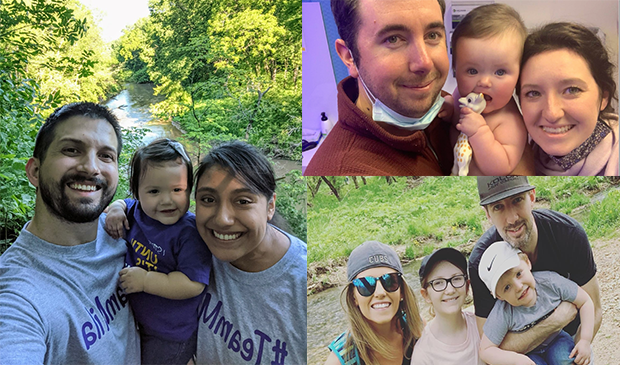 The final and unquestionably the most impactful session of the APHL 2020 Newborn Screening Virtual Symposium featured four families sharing their respective newborn screening experiences. The laboratory, follow-up, ethics, clinical and advocacy perspectives that we heard over the course of the four week virtual symposium achieved an apt denouement with the Parent/Patient panel. Emotional and compelling, the heartfelt personal anecdotes offered a look into the extraordinary impact that newborn screening has on the lives of families.

Easton Birkenholz
Corinne and Tyler Birkenholz welcomed their first child, Carsyn, several years after Iowa began screening for congenital adrenal hyperplasia (CAH). Their first baby was healthy and they were aware that Carsyn was tested, but otherwise they knew very little about newborn screening. Everything was normal. A few years later Carsyn expressed the desire for a baby brother. A wish came true when the Birkenholz family welcomed Easton, a seemingly healthy baby boy into their family. Shortly after his birth, Corinne and Tyler learned that Easton had screened positive for CAH, vaguely remembering that Carsyn had also received this all-important screen and therefore prepared to consume what this might mean. Their pediatrician was not very familiar with the rare disorder so the Birkenholz family was sent to Iowa City to get more information. What followed was a crash course in CAH and an ongoing journey with baby Easton, understanding the treatment and lifestyle management that would be required to help keep him healthy, made possible by his early diagnosis.

Amelia McDonough
Stephanie and Steven McDonough also went, via ambulance, from Dubuque to Iowa City following the positive newborn screen of their daughter Amelia and upon calm urging from their doctors. The McDonoughs reported knowing almost immediately after birth that something was not right, indications doctors identified through Amelia’s tone and in their careful watchfulness over her. Amelia was diagnosed with a rare genetic disorder called GA-1 that affects about one in every 40,000 births. Their whirlwind journey started with her newborn screen and continues with the expert level care that they receive routinely from an incredible care team. It was extremely important to detect GA-1 early so that Amelia could lead a healthy life. Stephanie explained, “It’s serious and critical, but treatable and manageable.”

Mila Hammes
When Mila was born, Karen and Kade Hammes were informed that their daughter had two rare mutations for cystic fibrosis for which there was no drug treatment available. Newborn screening identified these mutations and, following additional confirmatory testing, Mila’s diagnosis came one harrowing week later. The diagnosis changed their lives – they met the initial newborn screening results with fear but have since become fervent advocates in the cystic fibrosis community. “Cystic fibrosis is a time consuming disease,” shared Karen as she described the job and schedule changes that she and her husband initiated so that they could work together toward their shared goal of keeping Mila healthy. “One day,” continued Karen tearfully, “CF will stand for Cure Found.”

Kayin and Karin Oguntoyinbo
Ashlee and DJ Oguntoyinbo, parents to nine-year-old Kayin and four-year-old Karin, had a slightly different newborn screening experience, two times over. Before starting their family, Ashlee and DJ were aware that they were carriers of the sickle cell trait, which meant each of their offspring had a one in four chance of inheriting the disorder. Ashlee and DJ were devastated to learn that both Kayin and Karin were born with sickle cell disease. The Oguntoyinbos expressed their gratitude to a newborn screening system that allowed them to meet with genetic counselors prior to childbirth and to find out early, almost immediately after birth, of their children’s diagnosis thus allowing them to know what symptoms to monitor. Ashlee said that because of the newborn screening results, “we knew how to prevent [sickle cell] crises and were able to establish a relationship with a healthcare team.”

These personal stories of four different newborn screening disorders as experienced by four Iowa families welcomed supportive comments in the virtual platform chat box and drew a few tears from the compassionate moderators. The courageous families shared their stories, spanning the spectrum from having had no advance knowledge of what newborn screening would entail to having had the benefit of genetic counseling prior to the newborn screen. All of the families spoke of their journeys during the recent global pandemic of COVID-19, expressing the careful steps they are taking to protect themselves and to continue to support their communities of like-minded parents of children with disorders detected by newborn screening. This community is small, but mighty.

The panel concluded with Jelili Ojodu, director of the APHL newborn screening and genetics program, reminding participants of the global impacts of newborn screening. Ojodu expressed gratitude toward all system stakeholders who make these success stories possible, emphasizing what we all know to be true, that “newborn screening saves lives.”