Did you know there’s no known influenza A subtype that’s only found in humans? That makes influenza a perfect example of why a One Health approach is critical to disease prevention and response.

One Health is about breaking down the silos between human, animal and environmental health and adapting a synergistic approach for planning and responding to threats. When it comes to influenza, this multi-disciplinary approach can make us better prepared to evaluate, predict and respond to infections in both humans and animals.

Toward the end of last year’s flu season, I decided I wanted to delve deeper into One Health. I registered for my first One Health Academy talk, which covered the 1918 influenza pandemic and ended with a discussion around the adjacent possibilities in 2018. As I learned more about influenza, I realized the flu wasn’t just a disease infecting humans each winter, but rather a year-round burden causing severe disease in animals too. Eight months later, here I am as the respiratory diseases intern at APHL, and I haven’t missed a single One Health talk yet. If there’s one thing I’ve learned thus far in my career in public health, it’s that we can’t control the future, but we can control how we respond to try and shape the future.

What are some implications of influenza for human & animals? 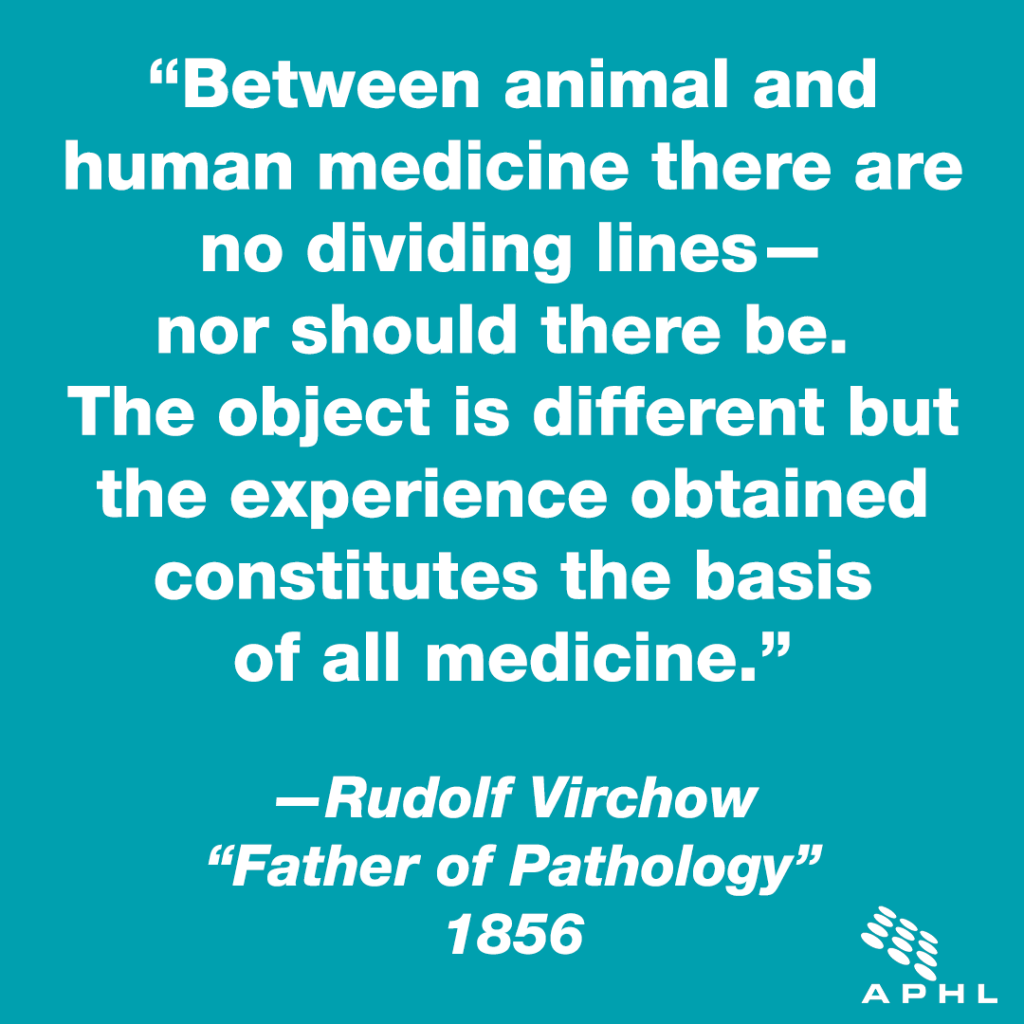 Zoonotic diseases, such as avian influenza, can infect and cause severe disease in both animals and humans. According to the CDC, 60% of known infectious diseases in humans are of animal origin and 75% of new and emerging infectious diseases are spread from animals. Not only does the flu infect humans, influenza also infects a number of other animals (both domesticated and wild) and can cause severe disease.

The primary threat, of course, is the spread of new influenza strains. Influenza pandemics occur when a novel influenza virus emerges in an animal host, changes to the point where it is able to infect humans, and then changes further so it can continue to spread from one person to another.

Once the virus can be transmitted from human to human, a pandemic becomes possible. Global population movement directly influences the spread of influenza pandemics. Looking back to the 1918 influenza pandemic, troop movement during World War I was a major factor in the spread of the virus between continents. Today, international trade and travel has connected every region of the world. Transportation of humans, animal and goods increases the risk of exposure to pathogens. Did you know the influenza virus can remain infectious on surfaces for up to 48 hours? And when airborne, viral particles from a cough or sneeze can remain suspended in the air for up to 30 minutes. That is, if someone who is infected with the flu sneezes while on an elevator or in the bathroom of an airplane and 10 minutes later you enter that elevator or bathroom, you could become infected from those particles.

Aside from humans moving around the globe, animal travel is capable of spreading influenza too. Each year, birds such as ducks, swans and geese migrate between continents. If the any of those birds are infected with avian influenza, the virus can be carried and transmitted. If agricultural operations, domesticated animals or other potential hosts come in contact with infected birds or their feces, new influenza infections can be sustained.

Because we live in a shared environment where global travel is fast, global trade is easy and plenty of opportunities for inter-species transmission of influenza viruses exist, it’s important that experts work collaboratively. Within the veterinary community, areas of knowledge exist that can complement existing areas of knowledge in human health, and vice versa. One Health allows for an easier exchange of information and support between those professional communities.

In addition to the risk of transmission, influenza pandemics can have serious economic impacts. Societies around the world depend on the health of humans, animals and the environment for food, income and health security. Influenza is a major threat to animal agriculture as it can be fatal to chickens, turkeys and pigs. When a new influenza strain emerges, the livelihood for global communities, especially those who are largely dependent on agriculture cultivation, is put at risk. For example, live poultry markets have been identified as significant risk factors for transmission of avian influenza. Because many people who sell poultry at live bird markets are dependent on their operation for income, they are less likely to implement measures of prevention especially if it means closure of the market even temporarily and are at higher risk for exposure to avian influenza. Their poultry can continue to transmit the virus and, if they themselves become infected, they might also transmit the virus to other customers, their families or community members. In these cases, it’s important to include and understand all stakeholders such as farmers, consumers, market operators, supply chain transporters, and human and animal health professionals by taking a One Health approach to implement long term management for control and prevention of avian influenza.

The health of our ever-changing world depends on breaking down the walls between animal, human and environmental sectors. To effectively detect, respond to and prevent outbreaks of pandemic potential, epidemiological and laboratory data needs to be shared across sectors.

Integrated human, animal and environmental health/management systems promotes communication and collaboration among human-animal-eco sectors, thus optimizing success. Multi-sector coordination helps address joint issues and opens discussion on what to anticipate, what gaps exists, how to reduce duplication of efforts and enhances risk reduction. We need harmonized human and animal surveillance and research efforts that compliment and build upon one another. This is important because it can help human and animal health professionals identify the determinants that affect disease transmission such as pathogenicity, infectivity, antigenicity and resistance. By capitalizing on existing systems and infrastructure and by investing in capacity building, we can enhance our understanding of circulating viruses within animals, and better predict when and where a spillover could occur. Increasing laboratory and data sharing capacity at both the human and animal levels so that they’re equally capable to diagnose both human and animal influenza can help prevent knowledge gaps and identify where intervention is needed to prevent exposure. Furthermore, this can increase surge capacity so that more laboratories are able to provide the necessary help for when an outbreak occurs.

As we move forward, we must use a One Health approach to prevent multi-disciplinary threats like influenza pandemics. By collaborating between professionals with a range of experience and expertise, we can better address the unanswered questions around the risks for pandemic influenza at human-animal-environmental interface.