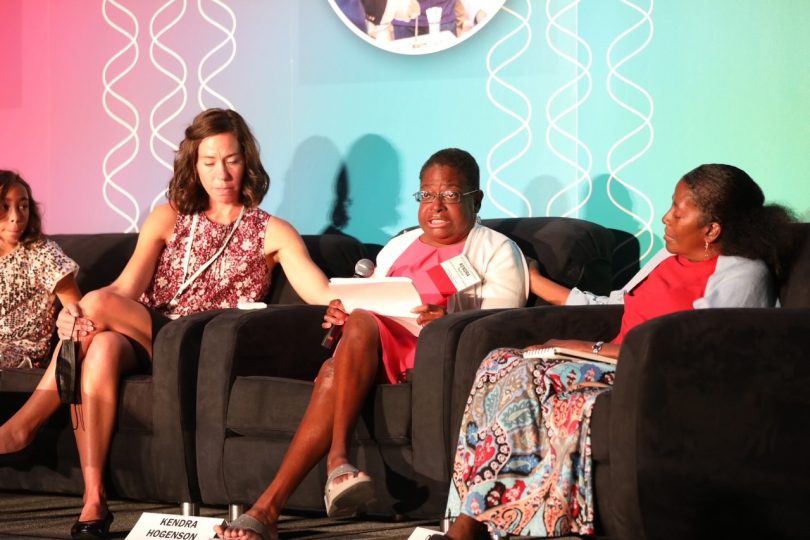 At six weeks old in the early 1970s, Kendra Hogenson was adopted. But her new parents quickly realized that instead of cooing and wiggling around, all their baby did was cry and beat her head against the wall. They had no idea what was wrong with their daughter and took her from doctor to doctor seeking help.

As Hogenson, now age 51, told her story as part of the Parent/Patient Panel during the APHL 2022 Newborn Screening Symposium in October, she began to cry. “One doctor even said, ‘put her away in an institution; she’ll never amount to anything,’” she recalled. But Hogenson’s mom said, “I know she’s in there.”

Finally, a pediatrician suspected sickle cell anemia and had the baby tested. The results were positive. Sickle cell anemia is part of a group of inherited disorders known as sickle cell disease (SCD). People with SCD have abnormal hemoglobin in their red blood cells that causes the cells to become hard and sticky and die early, according to the Centers for Disease Control and Prevention. The red blood cells can also get stuck in small blood vessels, causing severe pain and other serious health problems.

Routine newborn screening in the US will celebrate its 60th anniversary next year, and as of 2011 all 50 US states were screening for at least 26 disorders. Through a simple heel prick in the hospital when a baby is one to two days old, newborn screening tests an infant for rare but serious disorders that can be treatable.

If Hogenson, born in Washington, had received newborn screening when she was born, SCD would not have been included in the panel. New York was the first state to screen for the disease beginning in 1975. It wasn’t until 2006 that universal newborn screening for SCD was in place in all 50 states, Puerto Rico and the US Virgin Islands.

As a child, Hogenson was in and out of Seattle Children’s Hospital, which she referred to as her “second home.” She’s had meningitis three times which caused brain damage; strokes that led to learning disabilities; more than 20 surgeries; and 32 years of routine exchange blood transfusions, which she credits with saving her life.

Despite her challenges, Hogenson said she “exceeded all their expectations.” She graduated high school even though it was difficult: “Me and math still don’t get along.” She drives and has held a full-time job. “I wasn’t supposed to live this long; here’s to proving them wrong,” she said.

She thanked Symposium attendees for now screening every infant for SCD, “so their families don’t have to go what mine went through to find out what was wrong.”

Hogenson and fellow panelist Denise Bazemore, a 63-year-old woman who also has SCD, will soon be living in a new “sickle cell house” in Seattle called the “HUB,” which was developed by the Metro Seattle Sickle Cell Task Force, a grassroots organization.

HUB, which stands for healing, use and belonging, will offer people with SCD massage, yoga, acupuncture, reflexology and other therapies. It will offer educational and occupational workshops and offer a safe place for those with SCD to connect and support each other.

Also speaking on the panel were Susan Mays and her daughter, Indie, age 9. Thanks to the newborn screening program, Indie was diagnosed with maple syrup urine disease (MSUD) a few weeks after she was born. MSUD is a condition in which the body cannot process certain amino acids, requiring a strict low-protein diet.

Susan Mays said she didn’t really know what newborn screening was until her baby’s second-week follow-up appointment with her pediatrician, when she was told her daughter needed a second screening test.

“It makes me cringe to think about it now, but at the time I questioned why a second test was necessary, simply being clueless as to its importance,” she said. Indie wasn’t showing symptoms of MSUD, making the second test all that more important because that’s what led to her diagnosis. She had a confirmatory test a few days later.

Now Indie is a happy little girl who loves soccer, French fries and reading. She’s limited to 12-15 grams of protein a day and drinks four to five servings a day of medical formula.

While Mays said the process of getting tested and notified was “textbook,” she pointed out that she doesn’t remember being told about newborn screening during her pregnancy. She didn’t understand what it was for, causing her to push back a bit on that second test.

Mays said there’s an opportunity to explain what newborn screening is “far earlier than when the mom is pregnant,” perhaps even teaching about it as part of high school sex education classes. And it should certainly be emphasized in birthing classes and by pregnant women’s health care providers, she said.

It’s also important for families like hers to continue to share their stories about how newborn screening saved their babies’ lives and led to earlier treatment, she said. “I think all of us who have been impacted have a responsibility and an opportunity to help educate, starting with your friends, your family, using social media. I don’t think it relies on any one person or any part of the puzzle. Certainly, there’s a big opportunity for an understanding of why it’s done and why it’s important.”