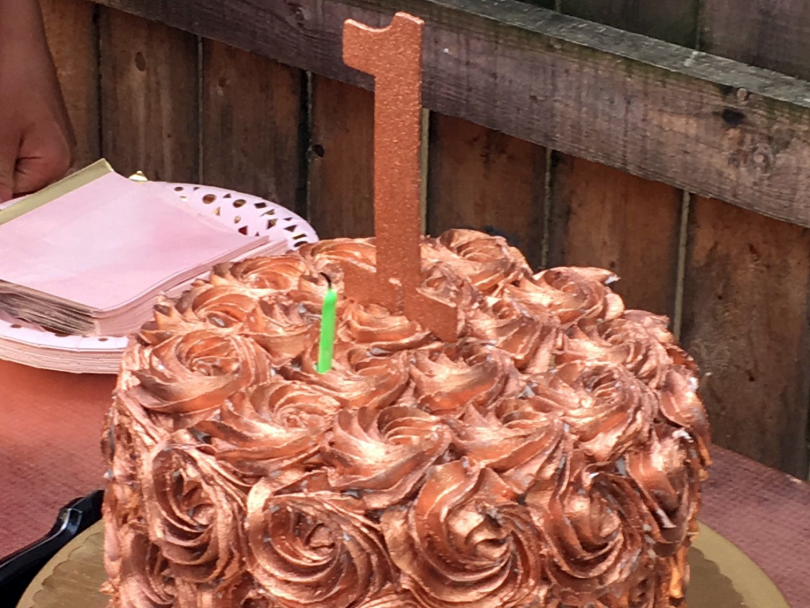 In presentations during the 2022 APHL Annual Conference May 18 session, “A Real Whodunit—Finding Danger in Unusual Places,” two state health departments shared how they discovered and attempted to stop two unusual food outbreaks in their state.

In 2018, Rhode Island epidemiologists received a consumer complaint about six sick children who attended a one-year-old’s birthday party. The kids, ages one to 11, were vomiting and had diarrhea. The state’s Center for Acute Infectious Disease Epidemiology (CAIDE) team quickly traced the illness to the frosting on the birthday cake.

The health department was able to get first a photo of the cake, which had been purchased at a local bakery, showing it was covered in a “metallic, glittery and rose gold” color, said Brendalee Viveiros, PhD, Rhode Island Division of Environmental Health. The coloring was made with “luster dust,” which may also be called gold dust, petal dust, pearl dust, sparkle dust, disco dust and highlighter dust.

“It is certainly a big trend that has been used in the last several years,” Viveiros said. “It’s often requested by consumers for things like weddings or special events. They want these cakes that have these kind of gold and glittery look to them.”

A team conducted an investigation at the bakery, where Viveiros conducted a food flow, a process to examine each step of the food preparation system. They discovered that the luster dust was purchased from an Etsy seller online and added to butter extract, which was then painted on the cake in several intervals. However, the luster dust label stated, “non-edible,” “for decoration only” and “non-toxic.”

“What we’ve heard from bakeries is that because it says non-toxic, people think it’s edible even though it says non-edible,” Viveiros said. “So, it causes some confusion to the industry.”

The team embargoed all luster dust at the bakery—some 70 samples. They also found edible items in the bakery’s retail shop with luster dust on them.

Because of the metallic look of the dust, the public health laboratory tested the cake frosting for heavy metals using microwave-assisted acid digestion and inductively coupled plasma mass spectrometry (ICP-MS). The laboratory discovered 22.1 milligrams of copper per gram of frosting, or nearly 900 milligrams of copper on a slice of cake. That is approximately 1,000 times the recommended daily allowance for copper in adults.

But what else was in the dust? The laboratory staff was able to trace the dust back to the original product and packaging. It was a pure copper powder intended for industrial coatings for floors. It had been repackaged several times, originally for an arts and craft store, then food decorations, then an Etsy shop.

“We were obviously expecting it to have high copper concentrations from the information from the lab, but I still don’t think we were expecting it to be pure copper at this point,” Viveiros said.

She pointed out that there is an edible version of luster dust, but it should be marked as such and include a required ingredient label. The team visited other Rhode Island bakeries, where they discovered non-edible luster dust being used in food. The health department issued a guidance explaining the risks, the difference between edible and non-edible luster dust, and that edible dust should have an ingredient list label. In addition, the US Food and Drug Administration (FDA) issued guidance and created a video targeted to home and commercial bakers.

Viveiros said it’s important for public health laboratories to be aware of the luster dust trend among both home and commercial bakers. She reiterated that there is an edible dust and that inedible dust can be used in bakeries but only for decorations that will be removed before consumption.

On June 7, 2021, the Minnesota Department of Health (MDH) laboratory received a Brucella isolate from a blood culture. Brucella can cause brucellosis, a bacterial infection causing joint and muscle pain, weight loss and fatigue. The test was from a 50-year-old male from Hennepin County, which includes Minneapolis and Saint Paul. The medical notes said he had eaten some Mexican cheese, but the health department staff were not able to reach him for an interview.

Four days later, on June 11, the laboratory received another isolate, this time from a 63-year-old woman admitted to the hospital on June 4 after complaining of fever, extreme fatigue, chills and lack of appetite. Her temperature was 104 and she was found to have sepsis and endocarditis. The woman reported eating some cheese her son-in-law had brought back from a trip to Mexico.

Over the past 20 years, Minnesota has had zero to five cases of brucellosis a year, said Maria Bye, MPH, Minnesota Department of Health. “It was weird that we had two brucellosis cases come in so closely together, but it appeared as it was a coincidence and that the two cases were unrelated,” Bye said. “Then, the other shoe dropped.”

On June 29, they had a third case. “An astute infectious disease doctor gave MDH a call to make sure we knew about these three cases and to let us know that this third case bought Mexican cheese from a cheese seller in the Twin Cities,” Bye said.

The three cases tested positive for Brucella melitensis, which mostly affects goats and sheep. This type of Brucella has been eradicated in the US but is endemic in other countries, Bye said. A blood culture is the gold standard diagnostic option, but it can grow slowly and take three to five days to flag positive.

MDH launched an investigation after the third case. Everyone affected was Hispanic. Initially, MDH attempted to use a telephone-based interpreter service to conduct interviews. But, they quickly discovered it wasn’t that useful as patients appeared afraid to implicate themselves or the cheese seller.

“It was difficult to build rapport, rephrase questions or probe deeper through an interpreter,” Bye said. “Because of this, we had a native Spanish speaker at MDH re-interview the first few cases and then conduct the rest of the interviews going forward. Some initially swore they bought the cheese at a local grocery store, but after the Spanish speaker got involved and did some prodding, they revealed the true source of the cheese.”

A man had brought back the cheese from Mexico. He said he only brought a small amount and handed it out as gifts. But some of the patients said he sold them the cheese, and one reported he had a large cooler full of it. The team was able to obtain a sample of cheese from one of the patients, performed a PCR test and it was positive for Brucella melitensis.

“You may ask yourself, ‘How did someone get a whole cooler of unpasteurized cheese across the border?’” Bye said. According to US Customs and Border Protection rules, solid cheese without meat can be brought into the US as long as it’s for personal use, Bye explained.

They discovered 11 cases over three months. Ten of the 11 cases were hospitalized for an average of seven days. There were no deaths. Complications included three cases of endocarditis (inflammation of the heart valve) and one case each of splenic infarction (tissue death in the spleen), enlarged spleen, hepatitis and osteomyelitis (bone infection).

MDH provided all patients with a letter in both English and Spanish for them to give to others who had eaten the cheese. The letter gave three main recommendations: monitor their case for six months after eating cheese, give the letter to their primary care doctor so they could receive post-exposure prophylaxis (doxycycline and rifampin for three weeks) and do serological monitoring every six weeks for six months.

The laboratory also faced challenges. Staff must handle samples appropriately to avoid exposure. In fact, Bye said,“because of the low infectious dose, brucellosis is a common lab-acquired infection. It may account for up to 2% of lab-acquired illness, which is disproportionately high when you think of how rarely it’s diagnosed in the United States.”

She also pointed out that Brucella are Gram-negative but can appear Gram-positive or Gram-variable, which may lead laboratory staff to rule out Brucella. Because of this, MDH had some initial laboratory exposures initially.

MD issued a laboratory alert on July 1, 2021, advising that labs can limit exposures by using appropriate personal protective equipment, minimizing aerosol-generating procedures and avoiding sniffing of culture plates. “We also tried to emphasize that clinicians should alert lab staff if brucellosis or any other select agent is suspected in a patient,” Bye said.