Wow, this has been quite a year for public health. Vaccine preventable disease outbreaks, MERS-CoV, chikungunya, EV-D68, and Ebola on top of the usual critical food safety, environmental health, preparedness and global health work being done by our members tested every system across the board. While I feel it is safe to say that no one wanted to face these issues for a multitude of reasons, we were beyond pleased to see public health laboratories face and respond to the many challenges of the year. As we hear from our members often, “It’s all in a day’s work.”

These are the blog posts that brought in the highest number of readers this year. Thank you to the APHL staff and members who wrote and contributed to these stories; and thank you to the many readers who keep coming back. 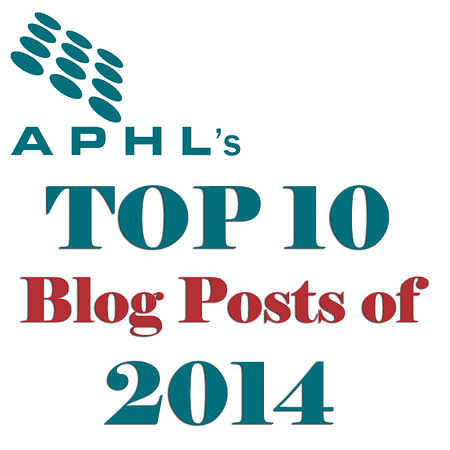 8. MERS-CoV: Why We Are Not Panicking — Following the confirmation of two MERS-CoV cases in the US, the public began to worry that the outbreak could spread here. Some of APHL’s Infectious Disease program staff and Public Health Preparedness and Response program staff explained why they weren’t panicking. As they say in this blog post, “…We in the public health system are poised to handle MERS-CoV and other health threats whenever, wherever and however they enter our country.”

7. Could funding cuts to food safety programs make you sick? — We followed the journey of a hypothetical batch of peanuts from farm to table, so to speak. Along the way our peanuts became contaminated with Salmonella. But as funding cuts have deeply impacted food safety programs, would the contamination be detected early enough to prevent an outbreak? Or at least to stop an outbreak from spreading further?

6. USAMRIID: Biodefense from the Cold War to Present Day — Our Public Health Preparedness and Response program staff visited the US Army Medical Research Institute of Infectious Diseases (USAMRIID) and shared some of what they learned about its history and the fascinating work done in their laboratories. At the time, we didn’t know that USAMRIID would be thrown into the public eye as the Ebola story unfolded.

5. Dylan Coleman Has a Story to Warm Your Heart — Thanks to newborn screening, Dylan Coleman had a simple non-invasive test that detected critical congenital heart disease (CCHD). Without this test, Dylan may not have survived. He was the first baby born in Maryland to be diagnosed with a heart defect as a result of this newly added test.

4. In US, Massive Effort to Detect and Respond to Ebola Already Underway — Just a few weeks before the first Ebola case was identified in the US, this blog post outlined how public health laboratories were preparing just in case. By the end of the month we all learned that this preparedness effort would be tested and ultimately shown to be successful.

3. Food Safety Funding Cuts in Action — Two days after our blog post on food safety funding cuts (see #7 above) went live, it became obvious that our hypothetical situation was playing out in real life with a stone-fruit recall. Testing performed in Australia found Listeria on stone fruit distributed from a company in California. A similar program in the US was cut from the budget on December 31, 2012; had this program still been in place, the contaminated fruit may have been identified and intercepted long before arriving in Australia.

2. Enterovirus D68 Testing, Surveillance and Prevention: What We’re Telling Our Friends — As there were more and more reports of Enterovirus D68 infections in kids, parents started to worry. APHL’s Infectious Disease program staff tried to address concerns and assure people that the clinical and public health communities could handle this outbreak.

1. Testing for MERS-CoV: The Indiana Lab’s Story — The staff at the Indiana State Department of Health Laboratories were kind enough to write about their encounter with MERS-CoV. They were the first laboratory in the US to have a positive MERS case. Thanks to effective preparedness efforts and highly qualified staff, they were able to quickly and safely obtain accurate results. This is public health!