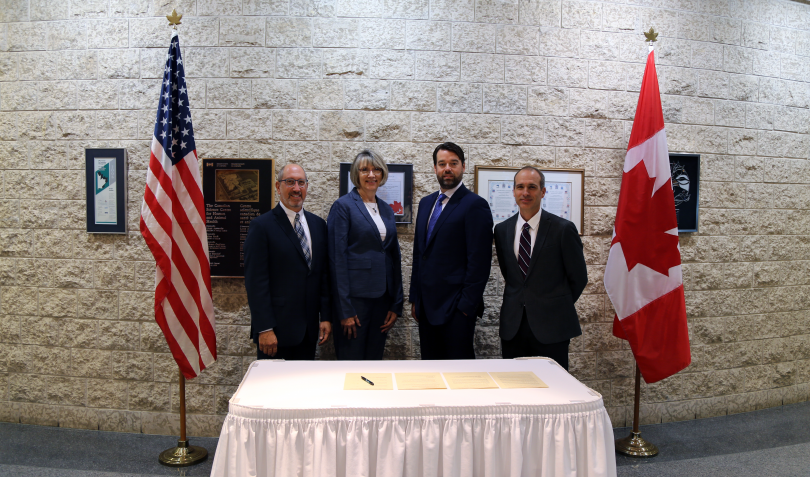 What prompted APHL and CPHLN to establish the first Canada-US MOU in 2004?

Kuschak: I was hired in 2003 to lead the CPHLN and met Scott Becker at a meeting in Toronto a week later. We started talking and came up with the idea for an MOU as a way to formalize the relationship between our two networks. We’ve maintained an MOU from 2004 to this date, with modifications and re-signing in 2008, 2011 and now in 2018.

Actually, our Canadian laboratory organization precedes 2004, going back all the way to 1947 when provincial lab directors created a Technical Advisory Committee to advise the national lab. This group disintegrated in the late 1990s, but resurfaced as the CPHLN after the 9/11 and anthrax attacks. CPHLN member labs collaborate and assist each other, much as public health labs do in the US. All provincial and federal CPHLN labs operate on an equal footing, which makes the network unique.

How does the MOU benefit CPHLN and its member laboratories?

Kuschak: The MOU enables our provincial labs to break through the governmental hierarchy and interact directly with state public health labs. If a provincial lab director has a particular challenge, he or she can be linked through APHL to a state lab director who is dealing with the same issue. Additionally, the MOU makes it easier to obtain approval for travel and for other collaborative activities to support our partnership.

More broadly, the CPHLN-APHL relationship facilitates collaboration on technical issues, interventions like exchange of information, knowledge, and participation in APHL board of directors meetings, annual meetings, and other activities.

CPHLN also benefits from APHL’s work to develop standards, guidelines and tools to strengthen laboratory practice. For instance, we’ve adapted the Core Functions of Public Health Laboratories and worked with APHL to develop the Laboratory Assessment Tool for use by all public health labs.

How does this cross-border laboratory partnership benefit the public’s health?

Kuschak: It makes such a difference to have long-established personal relationships on both sides of the border.  We can pick up the phone and get answers from each other when we need them. As a result, we can respond more quickly to events – and the faster we respond, the sooner our data is available to guide patient care.

Tipples: The ongoing exchange between the two networks also helps to ensure the consistency of lab diagnostics and surveillance in support of patient care and public health action. This is vital considering the number of people who cross the Canada-US border daily.

How does the APHL/CPHLN collaboration support public health emergency preparedness?

Tipples: It’s often said that emerging diseases know no borders. A disease threat in the US is a threat in Canada as well. We participate in PulseNet and other international disease surveillance systems such as influenza and measles. Occasionally, specimens from Canada go to CDC for analysis if we lack the capability, as occurred very early on during the Zika outbreak.

Kuschak: Our US network partners are always ready to help in an emergency. In 2014 we wanted to know what was happening with Ebola testing in Texas. If we’d contacted the state health laboratory, they would have said, “Who are you?” Instead we called Scott [Becker] and he got back to us within a day with the information we needed.

Here’s another example: Many years ago I was at APHL’s old offices in downtown DC when I got a call from Frank Plummer, who was then the director general of our national lab. Frank explained that there had been an issue with a proficiency panel distributed by a diagnostics company to labs in the US and Canada. The panel included a particularly concerning pathogen strain. I asked, and received approval, to share this news with Scott so that he could alert APHL member labs. I then had to get on the phone to tell our provincial labs to handle the panel with appropriate bio safety precautions. Scott set me up with an office and a phone, and offered to get me anything I needed, including lunch. You can’t beat that kind of support!

Do you foresee opportunities to expand the APHL/CPHLN partnership?

Tipples: Collaboration between the two networks has expanded already. As a member of APHL’s Training and Workforce Development Committee, I’ve had a chance to assist with development of the new DrPH in Public Health Laboratory Science and Practice program, designed to address the shortage of CLIA laboratory directors. I was also able to pull in the NML’s talented lead bioinformatician to contribute to the development of the bioinformatics component of the curriculum.

And as of 2017, there’s a place reserved for a Canadian in APHL’s Emerging Leader Program. We’re excited to have CPHLN represented in this excellent leadership development program.

Kuschak: Our public health agency has asked for more lab involvement in shaping nation-wide health planning. We’ll be collaborating on development of a national strategy for preparedness and response to viral hemorrhagic fevers, development of a public health genomics strategy for Canada, and other work. As we move forward with this and similar initiatives, you can be sure that we’ll be on the phone once again with our American colleagues.