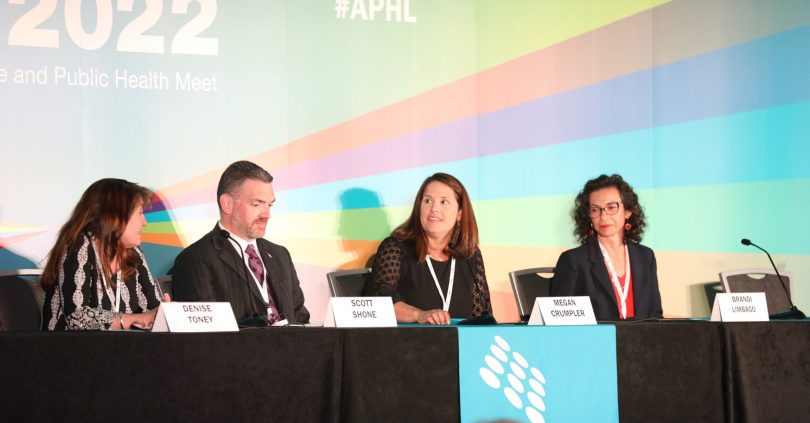 A panel of laboratory directors shared how they responded when the COVID-19 pandemic hit and what must change, as laboratories prepare for future threats. The session began with a presentation by Christina Potter, MSPH, a senior analyst and research associate at the Johns Hopkins Bloomberg School of Public Health’s Center for Health Security.

In late 2020, APHL formed a partnership with the Center for Health Security’s Outbreak Observatory, which allows researchers to support organizations responding to disease outbreaks by cataloging operational challenges and lessons learned.

While there were wide reports of public health challenges in the early months of the pandemic, there was no systematic accounting of what public health laboratories were going through, Potter said. That’s where the Outbreak Observatory came in. Potter and her team interviewed employees at 25 state public health labs and three local labs, representing 27 states with 68 interviewees. To encourage frankness, the information later reported by the analysts was not attributed to interviewees.

“Every lab we spoke with touched on this struggle of trying to figure out exactly what their role is in the COVID-19 response and struggling with the millions of decisions that go into strategizing and carrying out that role,” Potter said.

Laboratory professionals shared the difficulties of making decisions without much guidance and with political interference, as well as dealing with jurisdictional leadership interference, regulatory hurdles, working with inexperienced new testing partners, supply chain issues, old equipment, and lack of staff and funding.

“Future planning really needs to account for retaining current public health lab workforce, with all the knowledge gained from this pandemic,” Potter said.

Panelist Scott Shone, PhD, HCLD (ABB), agreed. Shone, laboratory director, North Carolina State Laboratory of Public Health, shared his plan for hiring new staff with the influx of federal funding. “As the funding sources advanced, we started to think longer term, about how we can not only continue to respond to the pandemic but begin to address some of the longer-held public health issues.”

But one of the challenges is that the funding has an end date, so Shone’s laboratory began to hire for “time-limited” positions. “Some people [in other states] decided it wasn’t worth it, which is a shame because we all desperately need a workforce,” he said.

Instead, Shone’s leadership team thought strategically about what positions they could hire for and “build them programmatically so they became important enough to justify to our Legislature that they need to be maintained permanently.”

In North Carolina, this includes staff in the areas of quality control, advanced micro-detection and bioinformatics, data modernization, and outreach and training.

“We wanted to make sure that we put people in positions that even though they were time-limited, they had measurable impacts so we could show that data when we said we need to continue and we need more funding,” Shone said.

Shone anticipates about one-third of their 20–30 new positions will continue to be funded. “Otherwise, we’ll have a dramatic impact on the programs we’ve established as part of the pandemic. I joked early on, ‘don’t let a good pandemic go to waste to make improvements long term.’”

DCLS did invest in high-throughput instrumentation and a diversity of instruments, but expanding partnerships was critical. Pre-pandemic, DCLS had already established relationships with some of the state’s large medical centers.

“We decided to build upon the concept of the [Laboratory Response Network] structure such that we created a network within Virginia, and we identified laboratories in various regions of the Commonwealth and stood them up and gave them funding to expand their instrumentation, but also paid them to do laboratory testing for us,” Toney said.

They named their partnership the OneLab Network. The regional approach allowed the division to direct samples to various laboratories, which improved turnaround time, Toney said. Beyond increasing the number of locations for diagnostic testing, the partnership allowed the state laboratory to divert testing if, for example, an instrument broke. Later, they took advantage of the network to conduct variant sequencing.

“By building these laboratories and these collaborations up, [we hope] to look to other issues of public health that we may be able to share and divide out some of the work because there’s so much to do,” Toney said. “By having these strong partners, we can not only build upon their research expertise, we can work toward a standardization and a level of quality that we can be sure of.”

In Orange County, CA, public health laboratory workers recognized the need for an inventory management system—as boxes piled up in hallways while other items were in short supply.

Creating an inventory management system was important to not only keep track of supplies but to prioritize testing, said Megan Crumpler, PhD, laboratory director at the Orange County Public Health Laboratory in Santa Ana, CA. “Were we going to be able to run CT/GC and SARS on the same day, or did we have to hold on to some of those supplies?”

Despite the challenges and the stressors of these past two years, Shone encouraged public health laboratory professionals to consider the positive ways the laboratory staff responded and how much better prepared they are for future outbreaks.

As he meets up with other public health laboratory directors and their staff at this week’s APHL Annual Conference in Cleveland, Shone said everyone keeps saying over and over, “I can’t believe we all made it through this.”

“That’s incredibly positive,” Shone said. “It’s scary to come away from this just thinking about how many things went wrong, because we’re here. It’s tragic that we lost a million of our citizens to this in this country, but no one in this community did anything but everything we could do.”