My name is Heather Smith, and I am the mother of two children born with X-linked SCID, although one has passed away.  Our first son, Brandon, began his battle with SCID in November of 1993 when he came down with his first cold.  He was 6 months old at the time, and appeared up to this point to be a “normal” baby, until we quickly learned that he did not respond to a cold like a “normal” baby would.

A few days after he developed his cold, he was admitted to the hospital when he showed signs of failure to thrive.  He had a difficult time eating, a rash on his face, thrush in his mouth, and his fingernails had turned blue. Immediately the doctors began testing him for everything they could think of including Cystic Fibrosis and AIDS.  Although all of the tests came back negative, Brandon did not respond to treatment and was quickly transferred from hospital to hospital, while the doctors battled for answers and some kind of a diagnosis.

Finally, after being in the hospital for 3 weeks the doctors came up with a “preliminary” diagnosis, Severe Combined Immune Deficiency (SCID). I had seen the movie, The Boy in the Plastic Bubble, with John Travolta, but I never dreamed I would someday lose my first born child to this devastating disease.  At this point, Brandon was on ECMO (a heart lung bypass machine) and suffered from Graft vs. Host Disease which he developed from the 13 blood transfusions he received during his hospitalization.  The idea of a bone marrow transplant wasn’t even an option presented to us for consideration.  Instead, we were told that we had to say goodbye to our only child and to turn off all of the machines that were keeping him alive. Three and a half weeks after initially becoming ill, our precious Brandon passed away and became our SCID Angel for Life.

It took over 6 months for geneticists to confirm that Brandon had died of SCID and that I was a carrier of this deadly disease.  Because of this, when we became pregnant the next time, we immediately had a CVS test done to see if this child would also be affected.  After all, “Knowledge is Power” and we felt that as long as we knew what we were dealing with, we could come up with an acceptable treatment plan for this baby.  The next day we found out we were carrying a boy and suddenly the odds went from one in four to 50/50.  Three weeks later we got the call from Dr. Jennifer Puck that this baby also suffered from SCID. 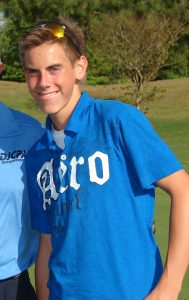 Immediately we started to make a plan.  We had already done quite a bit of research on SCID after we lost Brandon, and we knew that a bone marrow transplant shortly after birth was our only option to treat our new baby boy.  However, what we didn’t know was that the bone marrow transplant could actually be done in-utero, while I was still pregnant. And if that wasn’t amazing enough, we were pleased with the news that the transplant could actually be done in Detroit, just two hours away from our home at the time.  The only catch to this story was that the procedure had never actually been done successfully on a fetus before.  Our physician, Dr. Alan Flake, had been doing research in the lab on sheep and was waiting for the “perfect patient.”  The perfect patient would be the baby I was carrying. At 16, 17.5 & 18.5 weeks gestation three separate stem cell transplants were performed with his father being the donor.  If the procedure didn’t work, our plan B was to do a traditional bone marrow transplant within the first three months of life at Duke University Hospital.

At 36 weeks Taylor was born via C-section weighing 4 pounds 3 ounces and 17 3/4 inches long.  The cord blood was immediately tested and the preliminary results were extremely positive; his transplant looked successful but time would tell for sure.

Taylor has suffered numerous bouts of cold, flu and even pneumonia without needing to be hospitalized.  His only medication is a product called IVIG (gamma globulin) that he receives every three weeks.  Like Taylor, most children with X-linked SCID have a hard time developing B cells, the cells necessary to fight off certain infections, so by receiving IVIG infusions his body is essentially being given the necessary B cells it is lacking, and he is able to live an essentially “normal” life.  Today, Taylor is a thriving, healthy teenager with a life full of possibilities ahead of him!

Unfortunately, a tragedy had to happen in our family, and in so many other families with SCID, in order for us to know about this devastating disease.  If Brandon could have been diagnosed at birth, before the onset of a life threatening illness, his pain and suffering could have been stopped, his life could have been saved.  It has been 17 years since we lost Brandon but I still remember it like it was yesterday.

On May 21, 2010, Secretary of Health and Human Services Kathleen Sebelius adopted the national Recommended Uniform Screening Panel as recommended by the Secretary’s Advisory Committee on Heritable Disorders in Newborns and Children (SACHDNC).  The recommended panel now includes SCID, the first disorder to be added since 2005.  However, it is up to each state, territory, and the District of Columbia to choose to add SCID to their required newborn screening panel.  Currently only New York and Wisconsin require the test; Massachusetts and California both universally offer SCID testing, but it is not required.  Louisiana also offers the test, but testing is outsourced to the Wisconsin laboratory.  Similarly in Puerto Rico, the test is offered but bloodspot cards are sent to Massachusetts’ laboratory for testing.  Several other states have taken steps toward adding the test, but have not yet officially done so.  Heather and other parent advocates work around the country to ask states to add SCID to their routine newborn screening panel.