Amy and Steve were very excited about their first child.  She had a healthy pregnancy and every ultrasound showed a healthy, growing baby girl.  On February 21, Caroline joined their world and made them the family they always dreamed of.  She was perfect – “10 fingers and 10 toes,” Amy said beaming with pride. Caroline was three days old and Amy wanted to get out of the house for a little while, so her mother took her to Target for a quick break.  As they walked through the parking lot, Amy’s phone rang.  She saw that it was the pediatrician’s office and assumed they were calling to remind her of Caroline’s first visit scheduled for the next day.  Amy answered, “Hello?” The person on the other line sounded very serious and exuded urgency, “Amy, your daughter’s newborn screen showed positive results for PKU.  You need to take her to the University hospital immediately.” Amy stopped in her tracks.  What did this mean?  What is PKU?  Was her baby going to die?   The person on the phone gave no further information but continued to urge her to get Caroline to the hospital for testing.  Amy quickly became hysterical.  She called her husband and told him to meet her at the hospital with Caroline.

Once they arrived, the doctors ran additional tests on Caroline to confirm that she did have PKU (Phenylketonuria), a rare metabolic disorder that causes severe irreversible mental and developmental disabilities if not treated from birth.  Amy and Steve were terrified.  “No one in our family has this.  We have lots of nieces and nephews and none of them have it,” Amy told me.  The doctors gave them a can of the PKU formula and told her not to use it until they knew if Caroline did, in fact, have PKU.  Amy and her family went home; the doctor said he would call by 7:00 that night.  They waited.

Finally the call came.  The tests confirmed that Caroline had PKU.  “We cried a whole lot that night,” Amy said.  “I held Caroline all night — I never put her down.  She slept in my arms.”  The next day was Amy’s birthday.  What would become a gift, her mother gave her advice that she thinks of every day.  “She told me I had to put Caroline down,” she giggled.  “She told me that we are her greatest advocates.  This was our new normal and I had to start living it.”  And that they did.

PKU is an inherited disorder that causes a person to be unable to process a specific part of proteins called phenylalanine which is present in most foods.  Without a closely monitored diet, phenylalanine (or phe, as it is casually called) will build up in the blood stream causing severe brain damage.  Because protein is crucial for growth and development, special phe-free formula is given from the point of diagnosis.  Individuals with PKU will need to drink this formula for their entire lives to continue to get the necessary protein they need.  They will have to stay away from meats, grains, flour, soy products, fish, dairy, and beans; aspartame, the artificial sweetener commonly sold as NutraSweet and Equal, is also forbidden as it contains high levels of phe (so no diet sodas for those living with PKU). The PKU diet is mostly fruits and vegetables, and all portions have to be carefully weighed out. 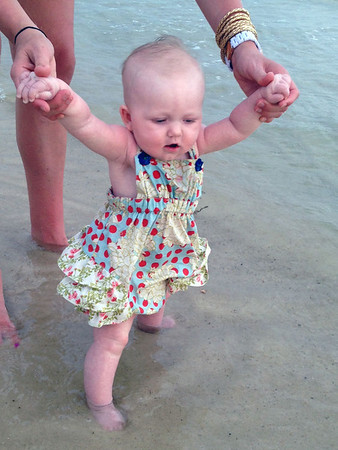 Caroline started the PKU formula immediately.  Fortunately, Amy was able to give her baby breast milk as she had intended; only now it was pumped and carefully measured. It couldn’t be Caroline’s exclusive sustenance.

Despite weekly blood tests and special formula, Amy admits she was in denial for those first few months.  Then she started thinking about Caroline’s future – PKU was going to be part of every single aspect of her life.  “What was I going to do when she got invited to her first birthday party?  I would have to make her a special cupcake.  And what about dates when she gets older?  And holidays?  And vacations?”  Suddenly it was very real.

When Caroline was just over five months old, her pediatrician and dietician told Amy it was time to start introducing solid foods.  They would introduce one food a week and closely monitor Caroline’s blood levels to determine her tolerance for phe.  First was applesauce because apples have the lowest amount of phe.  Next were carrots and then squash.  She could have a certain amount each day and not any more.

Amy and Steve work closely with a dietician, like all parents of a PKU child, to craft a diet.  All of Caroline’s food needs to be carefully weighed.  “Preparing a meal for a PKUer is very detailed and much harder than preparing a regular meal. That is why parents are so hesitant on leaving their child with anyone for an extended amount of time.”

Amy and Steve both work full-time jobs, so childcare was a major concern for them.  Caroline goes to an in-home daycare.  “Our daycare provider is wonderful.  She took the time to understand Caroline’s needs and restrictions.  I send a notebook with Caroline every day – they have to write down every single thing she ate that day and they are not to rinse or dump anything out.  I need to know every bit of what she ate.”  Amy explained that there are days when the daycare provider will write that Caroline drank five ounces of milk, but when she sees the bottle she realizes it was only four and a half ounces.  “It has to be that specific.”

As Caroline gets a little older and can eat more types of foods, Amy looks to purchase prescription foods made especially for people living with PKU.  “I’m a terrible cook,” Amy admitted.  “Buying these prepared foods is really my only option to give Caroline some variety in her diet.  We want her to have some sort of normalcy when growing up.”  The cost of these foods is exponentially higher than the equivalent non-PKU foods.  “An 8.8 ounce box of her pasta costs $11.  A package of three of her little pizzas are $20.”  (By comparison, a typical box of pasta is generally 16 ounces and costs under $5 depending on the brand.)  “When this all began, we realized we needed to start a wedding fund, a college fund, and a food fund.  People laugh when I say that, but it is not a joke.”  Affording PKU foods is a struggle faced by many PKU families.

Amy and her family live in Missouri where state law only requires insurance companies to cover PKU formula and foods until the child is six years old.  “The old thinking was that by six a kid’s development is far enough along that they cannot become mentally retarded from PKU.  Now we know that even if they cannot regress into that severe state, there are still very serious complications that can happen if they go off the diet.”  She told me that if Caroline strays from her diet, she could begin having seizures, develop ticks, and other serious symptoms.  “PKU never goes away.  Caroline will need this food and the formula for the rest of her life and I don’t know how we will pay for it.  We’ll probably have to move to another state that does mandate coverage.”  While they once longed for a family with three or four kids, having more children with PKU would put an unfathomable financial strain on them simply because of the cost of food.  “We’ll at least have one more somehow.”  Amy and Steve have a 25% chance of passing PKU to all future children.

Amy knew of newborn screening prior to giving birth and remembers the nurse telling her it had been done. She said she thinks about that little heel-prick often. “Newborn screening saved my baby’s life.  I think daily about what our life would be like if we never had that test.  I am so grateful.”  In retrospect, Amy knows that if the nurse hadn’t told her the screen had been done, she never would’ve remembered to ask if it was.  “I know that there are other parents out there that just leave everything up to the doctors and nurses. While I know that newborn screening is mandated in every state, I just want to make sure parents out there get educated about how important this screening really is.  Parents should make sure the test was done before they leave the hospital.”

As she told me her story, she never once got emotional (although I cannot say the same).   “I would never say this is a burden.  It is hard, but I wouldn’t trade it for the world.”  She goes on to say that it does make her sad to see her friends handing their children anything they want to eat.  But despite their offers, she insists that she does not want them restricting foods or changing their behaviors out of respect for her.  “Life is going to be hard for Caroline and she needs to know that… We want her to know that PKU doesn’t define her, but it will always be a part of her.  We intend to raise a strong girl who can handle it.”

I told her how inspiring she is to me as a mother and she said, “You would do the same thing.”  She’s right.  She’s a mom doing what moms do best – caring for her baby.

Improving newborn sickle cell screening in Africa: ‘We can affect change there just like we did in the US’