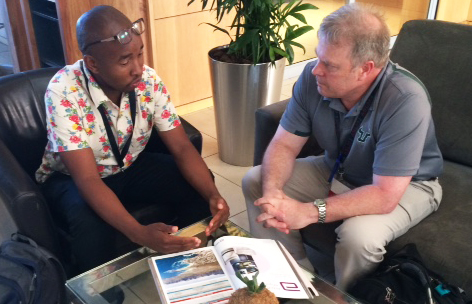 Andy Cannons was a member of APHL’s Emerging Leaders Program (ELP) Cohort III in 2011, an intensive year-long leadership development program for promising public health laboratory scientists. “It was a great program that gave me the tools I needed to become a better leader,” Andy shared. Once the program ended, he and his colleagues moved from the ELP program to the Network of Laboratory Leadership Alumni (NOLLA) where they could continue networking and seeking professional development opportunities.

In 2014, the ELP program went global with its first cohort in Lesotho. As part of this new endeavor, NOLLA members in the US were invited to serve as coaches for program participants in Lesotho. Andy was one of those coaches. “I was hesitant at first – unsure of what I had to offer – but I agreed,” said Andy. “The general idea was that I would be paired with someone and would support them in working through day-to-day challenges faced in their laboratory.” 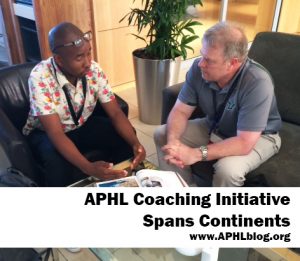 Andy was paired with Mokenyakenya Matoko, a national laboratory information systems officer in the Lesotho Ministry of Health. Despite some problems with video connection during their first Skype meeting, they were able to get to know each other a bit. “We discussed our backgrounds; how we got to where we are in our careers; our personality traits and leadership skills; and most importantly what Mokenyakenya was expecting from me as a coach,” explained Andy. “Thirty minutes into the meeting I concluded that Mokenyakenya and I were going to have a really good coaching experience.”

The two men met monthly via Skype, exchanging support and guidance. Mokenyakenya has worked on his communication skills, something he felt needed improvement. “Other important attribute that I have improved on is be myself. Though I am an introvert, I was advised try to take some leadership in most activities,” said Mokenyakenya. “I have learned that being an introvert it does not necessarily mean being shy and waiting for other people to comment. Rather I should try to participate in the process, give ideas.”

In December 2014 something unexpected happened. Andy and Mokenyakenya both travelled to South Africa for the African Society for Laboratory Medicine (ASLM) conference, however neither knew the other would be there. As Andy presented on laboratory tools to stop Ebola, Mokenyakenya sat in the audience and recognized his coach. “It was an incredible surprise to be able to meet Mokenyakenya in person and spend time talking while we were in South Africa,” said Andy.

After the conference, their regular meetings continued. “Dr. Andrew had played a major role in terms of discovering new habits and potential in me, most importantly self-confidence,” said Mokenyakenya of his experience.

Andy has also thoroughly enjoyed the experience as a coach. “I have learned more about myself; I’ve become more confident and understanding; and I’ve learned to think and adapt quickly. I am also hopefully making a positive and constructive difference in someone else’s life. The icing on the cake is that coaching Mokenyakenya has led to a friendship that I hope will last for years. That’s priceless!”